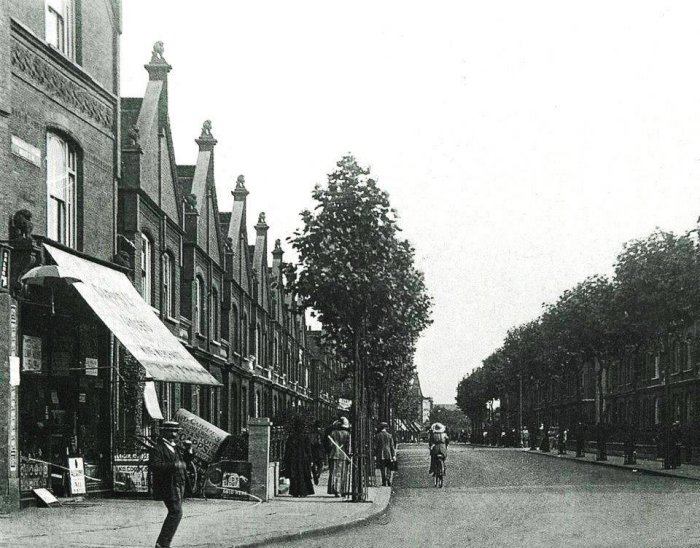 Wandsworth Bridge Road (1913)
Although opposite each other across the River Thames, Fulham on the north bank and Wandsworth on the south bank were historically isolated from each other; the nearest crossing points were at Putney Bridge to the west and Battersea Bridge to the east, both over a mile from Wandsworth. Nearby Battersea Railway Bridge opened in 1863, but as the local population grew and London's built-up area began to encroach during the 19th century, pressure from local residents and businesses for a road bridge to be built increased.

In 1864, an Act of Parliament was passed granting permission to the Wandsworth Bridge Company to build a bridge, to be financed by tolls, with the proviso that the bridge would be at least 40 feet (12 m) wide and cross the river with no more than three spans. Wandsworth Bridge and Albert Bridge were authorised on the same day, and were the last private tollbridges authorised in London.

Wandsworth Bridge was formally opened in a small ceremony in 1873, and a celebratory buffet was provided at the nearby Spread Eagle pub.

A new road, Wandworth Bridge Road, was built to link the new bridge with Fulham.

Fulham is an area of southwest London in the London Borough of Hammersmith and Fulham, SW6 (the successor to the Metropolitan Borough of Fulham) located nearly four miles south west of Charing Cross.

Fulham has several parks and open spaces of which Bishop's Park, Fulham Palace Gardens, Hurlingham Park, South Park, Eel Brook Common and Parsons Green are the largest. Many of the residential roads in Fulham are tree-lined, in some cases by houses painted in different pastel shades.