Temple Bar is the point in London where Fleet Street, City of London, becomes the Strand, Westminster, and where the City of London traditionally erected a barrier to regulate trade into the city. 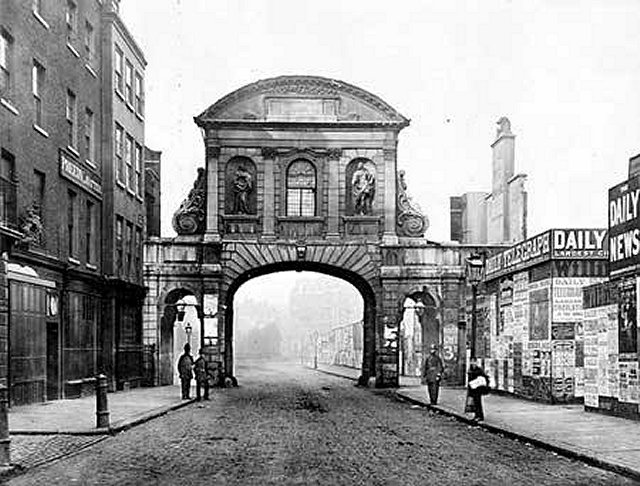 Temple Bar, London - 1880s
In the Middle Ages, the authority of the City of London Corporation reached beyond the city’s ancient walls in several places (the Liberties of London). To regulate trade into the city, barriers were erected on the major roads wherever the true boundary was a substantial distance from the old gatehouse. Temple Bar was the most famous of these, since traffic between London (England’s prime commercial centre) and Westminster (the political centre) passed through it. Its name comes from the Temple Church, which has given its name to a wider area south of Fleet Street, the Temple, once belonging to the Knights Templar but now home to two of the legal profession’s Inns of Court.

Commissioned by King Charles II, and designed by Sir Christopher Wren, the fine arch of Portland stone was constructed between 1669 and 1672. Rusticated, it is a two-storey structure consisting of one wide central arch for the road traffic, flanked on both sides by narrower arches for pedestrians. On the upper part, four statues celebrate the Stuart monarchy: on the west side Charles II is shown with his father Charles I whose parents James I and Anne of Denmark are depicted on the east side. During the 18th century, the heads of traitors were mounted on pikes and exhibited on the roof.

The other seven principal gateways to London (Ludgate, Newgate, Aldersgate, Cripplegate, Moorgate, Bishopsgate and Aldgate) had all been demolished by 1800, but Temple Bar remained despite its impediment to the ever-growing traffic. The upper storey room was leased to the neighbouring banking house of Child & Co for records storage.

It was discovered that the keystones had dropped in 1874. In 1878 the City of London Corporation, eager to widen the road but unwilling to destroy so historic a monument, dismantled it piece-by-piece over an 11-day period and stored its 2,700 stones carefully.

In 1880, at the instigation of his wife, Valerie Susan Meux, the brewer Henry Meux bought the stones and re-erected the arch as a gateway at his house, Theobalds Park, between Enfield and Cheshunt in Hertfordshire. There it remained, incongruously sitting in a clearing in a wood, from 1878 until 2003.

In 1984, it had been purchased by the Temple Bar Trust from the Meux Trust for Â£1. It was carefully dismantled and returned on 500 pallets to the City of London, where it was painstakingly re-erected as an entrance to the Paternoster Square redevelopment just north of St Paul’s Cathedral. It opened to the public on 10 November 2004.

As the most important entrance to London from Westminster, it has long been the custom that the monarch stop at Temple Bar before entering the City of London, so that the Lord Mayor may offer him or her the City’s pearl-encrusted Sword of State as a token of loyalty. The historic ceremony has often featured in art and literature.