The earliest known use of the name Finchley Common refers to refugees escaping from plague in London who encamped on the common in 1603.

The size of Finchley Common was estimated at anything between 500 and 1600 acres but at inclosure in 1816 it consisted of some 900 acres. Until Hornsey park was fenced off in the 13th century, Finchley Wood was indistinguishable from it and the division between the two long remained confused.

Herbage rights existed in Finchley Wood by 1410 and in 1504 it was described as âa common called Finchley Woodâ. Felling and removing timber, however, was forbidden as on the demesne estates. During the 16th century there was a direct conflict between the pasture rights of the inhabitants and the timber rights of the lord.

In 1533 Finchley men asserted their traditional right to âcooltesâ for swine in Finchley wood, which they said had been destroyed by the bishopâs woodward, who had also taken away their hedging bills. In 1562 they defended their claim to common of pasture âfrom time immemorialâ against the lordâs proposal to divide and separate a quarter of his woods. Judgement was given for the bishop, in accordance with the Act of 1543 for the preservation of woods. Possibly Great Colefall (later Coldfall) was the quarter so enclosed: when it was leased in 1645 with the other demesne woods it was called âthe wood in Finchley Commonâ. The inhabitants of Hornsey were within their rights under the Act of 1543 in claiming common within Great Coldfall, but it was treated as demesne rather than common in 1815.

A survey of 1647 upheld the joint rights of the freeholders, copyholders, and leaseholders of Finchley and Hornsey to all commons and wastes within their two parishes. An incloser of waste at Muswell Hill in 1671 was ordered by the Finchley court to open it because Finchley tenants had rights there. A Hornsey man was presented in 1688 for sheep on Finchley common but his offence lay in overstocking and not, as in the case of Friern Barnet offenders, in merely keeping animals there.

Finchley Common is most famous for the highwaymen of the 18th century. These were robbers who attacked travellers at night along the Great North Road. A few were from Finchley chancing their luck, but most were from Londonâs criminal underworld.

Before the 1790s merchants often had to carry large sums of money in gold as the smallest bank note was for ten pounds (a vast sum in those days). This made the largely uninhabited common a very dangerous place. In 1774 Sir Gilbert Elliott, Earl of Minto, wrote to his wife that he would not "trust my throat on Finchley Common in the dark".

Highwaymen who were caught were hanged at Tyburn. Sometimes their corpses were put in chains on a gibbet on Finchley Common. This was done to deter other highwaymen. The gibbet was used from the 1670s to the 1790s and was located where Bedford Road meets the High Road in East Finchley.

However, the gibbet was not very effective as a deterrent. Travellers protected themselves with guns and swords, and occasionally managed to scare these thieves off. It was the introduction of a mounted police force patrolling the road between Highgate and Whetstone in 1805 that finally ended the reign of the highwaymen.

Between the 1660s and 1820s the common was often used as a military encampment. General Monck mustered his army there in 1660 during the Restoration.

An Act of Parliament for the enclosure of the common was passed in 1811, and the land was divided into fields and awarded to local people in 1816. 15 acres were set aside as Fuel Land, to be rented out to local farmers and the money used as a winter dole of fuel to the poor. The Fuel Lands have been used as allotments since 1890. 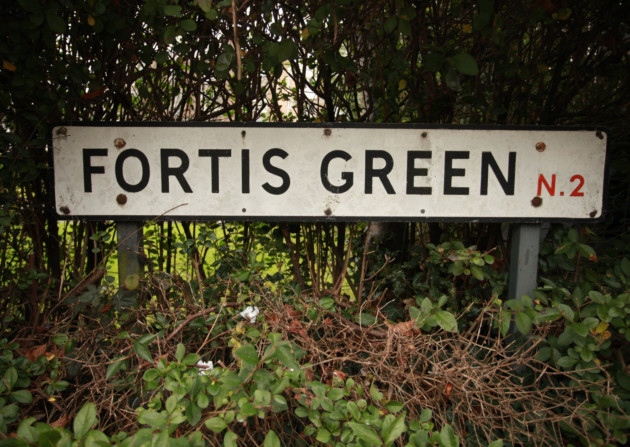 How Fortis Green got its name is not clear.

âFortisâ suggests a place before something, but the âsomethingâ is obscure. It appears in 1558 when it was considered part of Finchley Common. The green may simply have been a gap in woods and ran as far as where Muswell Hill Odeon is today.

Even into the 20th century Coldfall Woods came as far south as the present back fences of the houses on the north side of the road.

On a map of 1754, Cherry Tree Woods (then Dirt House Woods) to the south had been cleared and the land enclosed with at least two large houses. More houses were built along the road from the beginning of the 19th century.

By the middle part of the 19th century there were about 60 houses, mostly belonging to labourers, which had been erected on the green between the woods and the road.

The National Freehold Land society developed what had been Haswell Park into southern, eastern, and western Roads after 1852, with 180 plots, but development was slow. However, by 1913 the whole of the area south of the road had been developed as we see it today.

In the interwar period, the northern sections were developed at the expense of Coldfall woods, but even by 1936 much of the wood was still standing, with only the remaining northern sections being kept as a recreational area.

From about 1843 until 1888 there was a brewery owned by the Green family, which was latterly taken over by Inn Coop, finally closing in 1902. The police station was opened the same year.

The naturalist William B Tegetmeier lived in the area. Possibly the most important residents were Ray and Dave Davies (of the 1960s band, The Kinks), who were brought up at 6 Denmark Terrace, and had their first performance at the Clissold Arms.