Walmer Road is the oldest street in the area, dating from the eighteenth century or before. 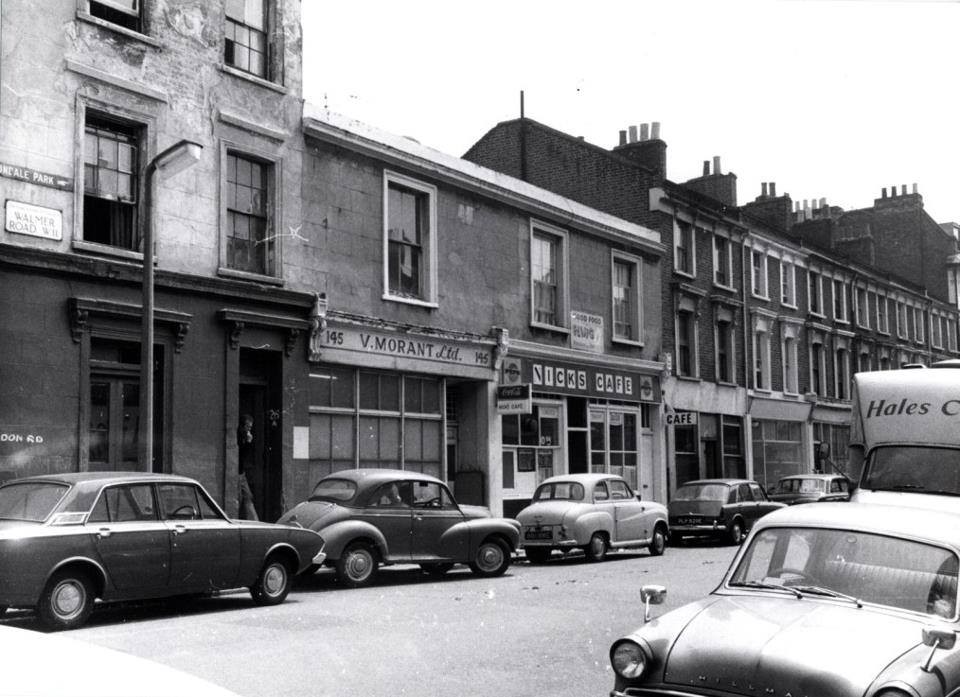 Walmer Road started as an established footpath called Greeneâs Lane and appears as such on the 1800 map of the area. It connected the Uxbridge Road (Holland Park Avenue) with one of the only buildings north of this turnpike road - Notting Barns Farm.

The soil was ideal for brickmaking and brickfields moved into the area in the first decades of the nineteenth century. Once hollowed out, these easily flooded.

Beside one such flooded brickfield, the settlement of Notting Dale was established. the main street of the small settlement, part of Greeneâs Lane, became called James Street.

The manufacture of pottery appears to have been established here before 1827 by Ralph Adams (fn. 8) of Grayâs Inn Road, brick- and tilemaker, who between 1826 and 1831 was the building lessee for most of the houses in Holland Park Avenue between Ladbroke Grove and Portland Road, the earth for the bricks having been no doubt dug from the Potteries area. The ratebooks first refer to this locality as âthe Potteriesâ in 1833. The tithe map of 1844 shows what appears to be a kiln on the east side of Pottery Lane near the present No. 34. The only kiln shown on the Ordnance Survey map surveyed in 1863 is that which still stands on the east side of Walmer Road opposite to Avondale Park.

James Street was renamed Walmer Road sometime in the 1850s. St. Andrewâs, was built at the corner of Walmer and Lancaster Roads in 1862.

Cholera was a constant companion. The only covered sewer in the area extended along the modern Walmer Road, but at too high a level to provide drainage for the houses there. The only possible outfall was to the main Counterâs Creek sewer, some 1,300 feet to the westward, and by September 1849 the building of a sewer was in progress.

There were improvements in other directions. As early as 1853 Mary Bayly had formed a Mothersâ Society in the Potteries, for the education of its members in the elements of hygiene, and between 1858 and 1863 the first makeshift schools in the area were replaced by permanent buildingsâa ragged school, built under Lord Shaftesburyâs auspices, in Penzance Street in 1858, and St. Jamesâs National Schools in Penzance Place in 1863. St. Johnâs Church was building a school on the west side of Walmer Road in 1861.

The streets were paved - Walmer Road was extending north - and taken over by the Vestry. By 1863 âthe Oceanâ (the flooded brickworks) had at last been filled in. Avondale Park was created in 1892 out of âthe Oceanâ. This was part of a general clean-up of the area which had become known as the Potteries and Piggeries.

Despite the continued presence of pigs, a Dr Godrich felt able in 1869 to report that âthe Potteries are in a more cleanly and healthy condition, principally owing to the improved drainage afforded by the Metropolitan Board of Worksâ.

This part of Notting Dale was designated in Charles Boothâs 1902 survey as amongst Londonâs poorest and was long been perceived by Kensington Council as a blot on the local landscape.

By mid century it was characterised as the centre of the infamous race riots of 1958, the horrific murders in nearby Rillington Place a couple of years earlier, along with a more recent shotgun killing in Walmer Road. Its houses were in poor repair without inside sanitation or hot water.

The West Cross Route was first mooted in the 1950s as part of a projected vital major arterial road into central London from the west. The main artery was to be a four lane dual carriageway extension of the A40 beginning where the Westway met Wood Lane and ending by merging into the start of the Marylebone Road in Paddington. The road would be elevated to carry it above existing buildings so as to keep demolition of such property to a minimum. This objective was generally achieved throughout its four mile length through the capital except in the area of Notting Dale around Walmer Road which was to be the site of an access point along its route.

A new roundabout sited below the new road was necessary to facilitate vehicular access. As this roundabout was below the road a huge demolition programme was required to accommodate it which would decimate a large and densely populated part of Notting Dale completely destroying the community resident there. The roundabout was sited broadly in a square area bounded by Oldham Road to the west, Silchester Mews to the east, Walmer Road to the north and Silchester Road to the south. All these roads would disappear at least in part along with sections of Blechydon Street whilst Calverley Street, situated between Oldham Road and Silchester Mews, Silchester Terrace and Latimer Mews would disappear completely. Walmer Road was somewhat unique in that only the south side (nos 2-128) was to be demolished along with part of the north side (nos 3-49 and 103-121) leaving isolated in the middle almost an island of three blocks of the north side (nos 51-101) which would remain quite literally in the shadow of the elevated dual carriageway above.

Kensington Council viewed the construction of the West Cross Route as an ideal moment for some opportunist slum clearance though how much thought was given at the time to the fate of its occupants is extremely debatable. It may be worth noting that at this roundabout an exit was planned (and built and the spur still exists today) for a further dual carriageway to strike out northeastward to join the foot of the M1. This plan was by contrast floored by objections from residents of the adjoining St Quintins Estate and others.