The alleyways and courtyards of London: N

The alleyways and courtyards of London: O

In 1619, a survey was made by Thomas Clay on behalf of the Earl of Dorset, owner of Tottenham Manor, and produced this map of the Parish of Tottenham, Middlesex. Note that south is on the top of this map – so it is upside down compared with most other maps.

It also shows a pond in the middle of the Gardens. The pond was roughly where Sainsbury’s is today and was fed by Hermitage Brook. The Brook was culverted and still flows undergroud today. Once the brook was culverted the pond naturally drained. Further north the culverting of Stonebridge Brook was less successful and regularly caused flooding of Green Lanes,  Harringay Gardens and surrounding low lying roads. 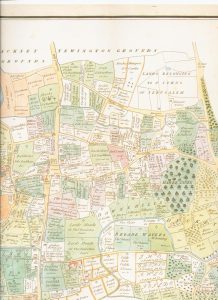