When was your house built?

A shorter version of this piece was written by Philip Grant as a “Secret History” article for the December 2007 issue of the “Brent Magazine”, to celebrate the 75th anniversary of the opening of the Stanmore Line, now part of London Underground‟s Jubilee Line.

The copyright remains with Brent Magazine and not The Underground Map.

In the late 1920s, many people who had moved out of crowded living conditions in London to homes on the newly developing estates in Kingsbury were using the 183 bus to Hendon Central Station, then the Underground Railway, for their journey to work. In November 1929 the Metropolitan Railway Company announced that it wanted to build an extension from Wembley Park to Stanmore, which would give local commuters direct trains to London. Within twelve months, plans for the branch line were in place, and a price for the construction work of £168,628-17s-3d had been agreed with the contractors, Walter Scott & Middleton Ltd.

A steam locomotive at the Kingsbury depot, in 1931/32. The houses in the background on the right are in Valley Drive and Crundale Avenue. Photograph from the Jim Peden Collection.

In early January 1931 the contractors set up their main depot in Kingsbury, just west of where the new station would be. As well as workshops, stores and offices they built a
wooden shed to house five elderly steam locomotives (the oldest being “Hayfield”, built in 1876, and a veteran of the original Metropolitan line out from Baker Street to Willesden
Green, in 1879, then on to Harrow in 1880).

A temporary single construction track was laid, along which the engines pulled trucks to deliver materials, and take the tons of clay dug out of cuttings by the Ruston & Hornsby
steam drag-line excavator down to where an embankment was being built towards Wembley Park, along the valley of the Wealdstone Brook. The original construction track crossed Kingsbury Road on the level, with “flagmen” controlling the traffic.

Within a few months, another depot had been opened at Stanmore. The spoil dug out to provide a level site for the station and sidings there was transported down a second construction track, to make the long embankment through Canons Park. Whitchurch Lane here was one of only three roads (the others being Kingsbury Road and the recently built Princes Avenue) crossed by the branch line. Bridges were also erected for three proposed roads, which were later built as The Avenue, Fryent Way and Cumberland Road. The last of these would link Honeypot Lane with a major new suburban development that was being planned, which was to be named Queensbury.

As well as new roads being proposed, some existing plans had to be changed to make room for the line. Messrs Keogh & Young had started developing the Gore Farm Estate by early 1930, with three residential streets planned on the north side of Kingsbury Road. 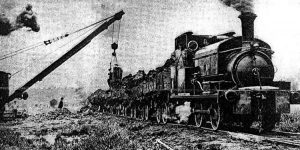 Work underway in early 1931 on the cutting just south of the planned Kingsbury Station. The picture was taken close to where the Fryent Way bridge across the cutting would be built, and the hill that can be seen faintly in the background is Barn Hill.
From “Meccano Magazine”, May 1934

Their Brampton Road would have been where the railway was, but when this could not be built the name was given to the “third” street, originally shown on the plans as Grosvenor
Road. Keogh & Young received compensation of £9,100 from the railway company, rather than the £15,000 they had claimed.

The work on the line had a very tight schedule, as the Metropolitan Railway had promised the Treasury, which was giving financial assistance to help relieve unemployment, that it would be open in twenty-one months. The “navvies” building the line worked from 7am to 5.30pm on weekdays, with a half-day to 12 noon on Saturday. For their 49½ hour week (excluding meal breaks) the labourers received 1/6d (one shilling and sixpence) an hour, with the skilled men such as bricklayers and carpenters getting up to 2/2d an hour.

Heavy rain during the second half of 1931 caused delays, particularly because of machinery (including some “new” petrol and diesel excavators) slipping and sinking in the wet clay. By
March 1932 the contractors still had most of the massive cutting between Kingsbury Road and Princes Avenue to excavate, and brought in double shifts. The night men worked from 6pm to 6.30am (with 1½ hours for meal breaks) from Monday to Saturday morning, so that the machinery was working 23 hours a day, with just half an hour between shifts for greasing and maintenance.

In July, a deputation from Kingsbury Council went to see the Engineer because of local residents’ complaints about the noise arising from night work, but although he said that he would keep noise to a minimum, the work had to go on. The Metropolitan Railway had already agreed a maximum twelve week extension of the line’s opening date with the Treasury, but the public were not told about this. In August, Miss Walker of Berkeley Road was one of several people who wrote to the company asking when the line would open as she was “…not sure whether to renew [her] season ticket for the Underground Railway, which expires shortly.”

After frantic work through the autumn, the Minister of Transport formally opened the line at Wembley Park on 9 December 1932, before visiting each station on a special train. The total cost of building the Stanmore branch, including buying the land (£142,791) and a separate contract for signalling, was around half a million pounds.

From 5am on 10 December 1932, Stanmore, Canons Park and Kingsbury stations offered passengers 144 electric trains a day. Many were shuttle services to and from Wembley Park, but they included through trains to Baker Street in just 25 minutes. The Metropolitan Railway became part of the London Passenger Transport Board system the following year, and “London Transport” opened a station on its Metropolitan Line for the new suburb of Queensbury in 1934.

Kingsbury Road, with the new station and a 183 bus, in the summer of 1933.
Source: Brent Archives. 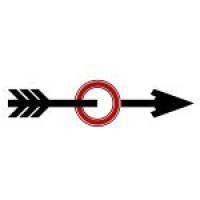