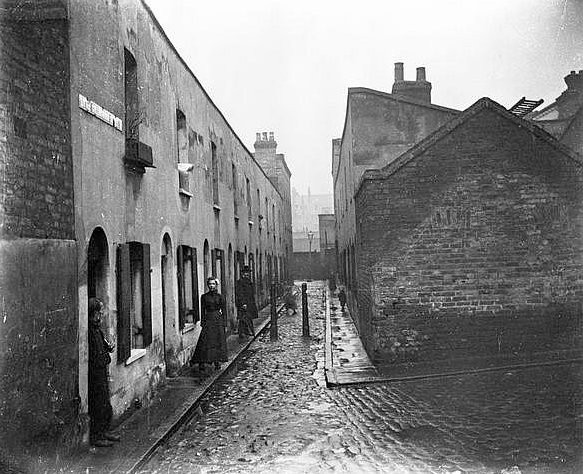 Little Collingwood Street, Bethnal Green (1890s)
Credit: User unknown/public domain
In a series of maps from the 1750s until the 1950s, you can see how London grew from a city which only reached as far as Park Lane into the post war megapolis we know today. There are now over 85 000 articles on all variety of locations including roads, houses, schools, pubs and palaces. 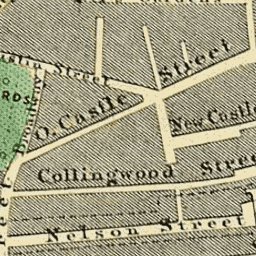 Collingwood Street, E2
Collingwood Street was at the heart of the Old Nicol rookery. In 1680, John Nichol of Grayâs Inn leased just over four acres of gardens for 180 years to a London mason, Jon Richardson, with permission to dig for bricks. The land became built up piecemeal with houses. Many of the local streets were named after Nichol.

At least 22 houses were built in Old Nichol Street in 1801-2, probably on the sites of 17th-century ones.

A garden - Kempâs Garden - was taken for building at about the same time. Mead built nine houses in Mead Street in 1806 and others were un...


Howard Street, WC2R
Howard Street ran from Surrey Street to Arundel Street until 1974 Norfolk Street and Howard Street were built over the grounds of Arundel House which had been the property of the Howard family, Dukes of Norfolk.


Ayres Street, SE1
Ayres Street was formerly known as Whitecross Street Ayres Street changed name in tribute to Alice Ayres - also immortalised in Postmanâs Park in the City. Ayres lost her life whilst saving three children from a fire in Union Street in 1885.

John Strype mentions Whitecross Street in his 1720 âSurvey of the Cities of London and Westminsterâ. He called it "a pretty clean Street, but ordinary Built and Inhabited." It is unknown how long before 1710 that the street was built.

The White Cross Cottages were built in 1890 by social reformer Octavia Hill and designed by Elijah Hoole, as model social housing. They include a hall with interior decoration by Walter Crane.

The dense grain of local small buildings was in part eroded after the Second World War. As redevelopment occurred, larger blocks, occupied by single uses, replaced the Georgian and Victorian houses, shops and warehouses. This is particularly evident in the area between Ayres Street and Southwark Bridge Road.
»read full article


Alpha Grove, E14
Alpha Grove runs from Strafford Street to Tiller Road Alpha Grove ran right through to the West India Dock fence dock - its cranes can be seen at the end of the road. When built in the 1800s, Alpha Road followed a section of the old Island path, Dolphin Lane.

Albert Terrace and Alfred Terrace were rows of houses in Alpha Road.

Alpha Road was renamed Alpha Grove in 1939, and was seriously damaged during WWII.

In 1964 the LCC declared this site as the Manilla Street Clearance Area, and this north end of Alpha Grove became a part of Manilla Street in the Barkantine Estate.

Alpha Road Methodist Chapel (Wesleyan Chapel, Alpha Grove Community Centre) was built in 1887. An additional hall was added in 1926. The buildings were converted into a community centre in the 1970s.
»read full article

There is some dispute over the etymology and meaning of "Aldgate," but various historians have provided some theories. The earliest record of Aldgate has it listed as East Gate, which makes sense, given its location as the easternmost gate on the Wall.

Another interpretation of its current name, "Ale Gate," indicates that an ale-ho...
»more


PREVIOUSLY ON THE UNDERGROUND MAP...

The full copyright information for the Underground Map may be found here.