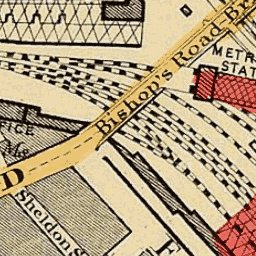 In 2003 while researching a book about the station, Steven Brindle discovered that Isambard Kingdom Brunel was responsible for the original Bishopâs Bridge and that the section he built over the canal was his first iron bridge and had a unique design.

The bridge was due to be rebuilt and negotiations between the council and English Heritage followed. It was agreed that the 1839 iron bridge would be dismantled with a view to future reconstruction. The bulk of the dismantling work took place in April 2004, allowing the bridge replacement work to proceed as planned.

Construction on the replacement bridge by Hochtief commenced in July 2003 with it opening on 14 June 2006.


Nine Elms
Nine Elms is an area within Battersea in the far north-eastern corner of the London Borough of Wandsworth Nine Elms was formerly mainly industrial but is now becoming more residential and commercial in character. In the area is the Battersea Dogs and Cats Home.

Nine Elms Lane was named around the year 1645, from a row of elm trees bordering the road, though a path probably existed between York House and Vauxhall from the 1200s. In 1838, at the time of construction of the London and Southampton Railway, the area was described as "a low swampy district occasionally overflowed by the River Thames [whose] osier beds, pollards and windmille and the river give it a Dutch effect".

Nine Elms railway station opened on 21 May 1838 as the first London terminus of the London & South Western Railway. The neo-classical building was designed by Sir William Tite. The station was connected to points between Vauxhall and London Bridge by Thames steam boats. It closed in 1848 when the railway was extended via the Nine Elms to Waterloo Viaduct to a new terminus at Waterloo. The ...
»more


Chester Road, DA15
Chester Road lies to the north of the Blackfen Road In the early 1930s, estates of houses and bungalows were being built in the area by C. R. Leech, Wates and New Ideal Homesteads.

Buying a new house in the area was an exciting business and show house viewing (even for those not intending to purchase) was a popular weekend occupation for many who lived in the inner London suburbs.

Many families who moved here were attracted by modern houses with gardens, fresh air and space. Many of the 1930s houses though were small and even had outside toilets.
»read full article

âBarnehurstâ was an artificial name created for the local railway station from the family name. The area was previously agricultural - a mix of market gardens, orchards and woodland. A settlement was concentrated along Mayplace Road. Only with the electrification of the railway in 1926 did the large housing developments of the 1920s and 1930s start to appear.

In 1926, the developer W H Wedlock Ltd started to build on the site of Mayplace Farm and based on Oakwood Drive.

W H Wedlock Ltd developed the âMayplace Estateâ between Erith Road and Barnehurst Avenue only after 1932 as the underlying land was more difficult to develop.

The Barne family finally disposed of May Place in 1938, selling it to Crayford Urban District Council for Â£24,500.
»read full article

Boxmoor Street, W11
Boxmoor Street was also known as Henry Place and Beaumont Street during its brief life It ran west from Norland Road and started its life in the 1840s. The western end was originally the Counterâs Creek rivulet, later superseded by the track of the West London Railway.

By the 1930s, Boxmoor Street was described as "a little road off the Norland Market in Shepherdâs Bush". Its entrance was located opposite the Stewards Arms pub.

It was quite unique as it was part of W11 lying within the London Borough of Hammersmith and Fulham. The M41 (West Cross Route) motorway was built over the top of the street.
»read full article

The original street dates from around 1829 and like other streets of similar name, commemorates Wellingtonâs 1815 victory. The whole area was redeveloped for the Pleydell Estate in 1965.
»read full article


Dupont Street, E14
Dupont Street ran from Maroon Street to Burn Street. Limehouse was a large, important London port in the medieval period. It specialised in production such as rope making and shipbuilding rather than cargo handling. In 1600, it was estimated that half of the population of 2000 who lived in Limehouse had a seafaring connection.

Dupont Street seems to have been built as Catherine Place during the 1820s. The name Dupont Street replaced Burn Street before 1912 though on the 1900 map, both names appear simultaneously. The street contained a pub - the Devonshire Arms - at 10 Dupont Street.

Well into the twentieth century, Dupont Street was a classed as a slum.

During the 1990s, Dupont Street was replaced by Shaw Crescent which was built over the top of it.

The estate was intended to provide 265 houses for approximately 1378 persons, according to the Council at the time. This first section, consisting of 106 houses and eight flat built at a cost of Â£35 706, was intended to provide accommodation for the occupants of Back Lane, Church Path, Bridge Street and Abbey Road areas. The mayor hoped "that the houses would be proceeded with rapidly, and that at an early date they would have the pleasure of transferring to the new houses tenants from the slum dwellings".

The Mayor gave a speech that day. He had asked the Borough Engineer, R.A. Lay, to see how many bricks Barking was responsible for laying in connection with the municipal houses since he came to the area in 1899, the year of the first housing scheme. Between 1899 and 1908, the ...
»more


Walnut Tree Place, SE11
Walnut Tree Place was a minor street replaced by the China Walk Estate. In the 17th century, this area was open fields and a favourite recreation spot for Londoners who would cross the Thames by boat to escape the city. By the late 17th century a place of entertainment called Lambeth Wells had been established in the vicinity of Lambeth Walk at its junction with Lollard Street. Lambeth Walk was then a lane known as Three Coney Walk. John Rocqueâs map of 1746 shows Three Coney Walk in an area of market gardens and sparse development.

The opening of Westminster Bridge in 1750 caused an increase in traffic which began to change the area. New turnpike roads were laid including Kennington Road. Although smart houses were built along Kennington Road, within a few decades the area behind it began to fill up with poor quality housing.

By the mid 19th century, the area was completely built over. It was by then notorious for its poverty and crime.

The poor housing conditions became a pressing concern after the First W...
»more

The land to the north of Pennyfields as far as East India Dock Road was owned by Mary Burch. In 1812, Castor Street was laid out and a number of leases were granted there to carpenters, a bricklayer and a builder. Henceforth a number of small houses were erected in Castor Street and Sandpit Road (later this was renamed West Street and again in 1875 renamed Birchfield Street).

Mary Burch offered short leases of 31 years - these were too short to encourage a high standard of building. Some nearby occupiers complained of filth âof every kindâ in Castor Street.

By 1832, Joel Langley and his family had acquired the land from Miss Burch. From about 1855 Joseph and George Mills establ...
»more


Grangeway, NW6
Grangeway, NW6 lies off of Messina Avenue. Built in the period immediately following the First World War, Grangeway is tucked into the corner of Kilburn Grange Park.

The park itself is a 3.2 hectare open space in Kilburn. Administered by the London Borough of Camden, it includes a childrenâs playground, basketball court, outdoor gym equipment and tennis courts.

The park first opened in 1913 having previously been part of the Grange estate.


Byfleet and New Haw
Byfleet & New Haw railway station is at the northern edge of Byfleet with the village of New Haw immediately to the north and the M25 motorway within 400m to the west. The station was designed by the architect James Robb Scott and opened on 10 July 1927 to cater for the increasing local population. The opening of the Vickers aircraft factory in 1911 led to Byfleetâs population doubling in just ten years. Many new houses were built to accommodate the factory workers.

The station was originally called "West Weybridge" and changed to its present name in June 1962.

It is on a section of railway that forms part of the South Western Main Lineâs original form, the London and Southampton Railway, which was built in stages. The first stage opened in May 1838 and joined the London Terminus in Nine Elms with Woking Common, now Woking.

Byfleet and New Haw Station is in close proximity to the historical Brooklands racetrack and aerodrome, which date back to 1907. The racetrack hosted the 1927 British Grand Prix a few months after the station opened.
»read full article

Staveley Road, W4
Staveley Road was the site of the first V2 rocket landing on London. At 18.43 on Friday 8 September 1944, a V2 missile launched from Wassenaar, Netherlands in Holland landed in Staveley Road, near the junction with Burlington Lane.

Sixteen seconds after the V2 attack occurred in Chiswick, another V2 landed in...
»more


PREVIOUSLY ON THE UNDERGROUND MAP...