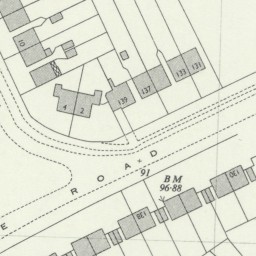 Avenue Road, DA8
Avenue Road follows the line of the original path leading to Lesney Farm and the Erith Manor House. In 1769 William Wheatley laid out an avenue of elms. Wheatley came from a prominent Erith family and was Lord of the Manor of Erith by then. He built a new manor house which was slightly blighted by a legend that the avenue was haunted by a headless woman being driven by a headless coachman and four black horses.

In 1858 the manor house was pulled down and the far Erith end of Avenue Road (around the railway lines) seems to have been developed at that time. In August 1874 the Wheatley estate was sold off, fetching Â£170 000 with the open land being sold for building development.

Even so, in the late nineteenth century with all of its pressure for new housing, the road developed only slowly.

In the twentieth century, Avenue Road was extended west along the remaining line of elms. At the western end, in the post Second World War years, council housing was built by Erith Borough Council. The very first development of the new Lesney Farm Esta...


Tube Mapper Project
https://wwwamazoncouk/dp/0750994371/ref=as_sl_pc_tf_til?tag=theundergro07-21&linkCode=w00&linkId=0c3e449b00d457af8e03965b586d2a72&creativeASIN=0750994371 The Underground is the backbone of the city of London, a part of our identity. It’s a network of shared experiences and visual memories, and most Londoners and visitors to the city will at some point have an interaction with the London Underground tube and train network. Photographer Luke Agbaimoni gave up city-scape night photography after the birth of his first child, but creating the Tube Mapper project allowed him to continue being creative, fitting photography around his new lifestyle and adding stations on his daily commute. His memorable photographs consider such themes as symmetry, reflections, tunnels and escalators, as well as simply pointing out and appreciating the way the light falls on a platform in an evening sunset. This book reveals the London every commuter knows in a unique, vibrant and arresting style.
»read full article
East India Dock Wall Road, E14
East India Dock Wall Road followed an early 19th century high stock brick wall leading to the former East India Dock East India Dock Wall Road was laid out as a road between 1822 and 1824 and gave access to Brunswick Wharf (built 1834) and ran parallel to Naval Row - where the two roads diverged is a connecting flight of steps for pedestrians.

The construction of warehouses along the north side of the Export Dock in 1816 led to the building of a general office at the west end of the quay. The beginnings of East India Dock Wall Road started as no more than a path to serve the building. The warehouse was a plain single-storey brick building, partly top-lit by means of a glazed lantern, with an entrance in the centre of the west front through a porch flanked by paired pilasters. This building survived until after the Second World War.

East India Dock Wall Roadâs main purpose by the 1840s was to connect Blackwall station (and the Brunswick Temperance Hotel) to the outside world. Blackwall had been a railway station which served as the eastern terminus of the Commercial R...
»more

It opened on 8 October 1907 on the corner of Shafter\sbury Avenue as a twin to the neighbouring Hicks Theatre (now the Gielgud Theatre) which had opened ten months earlier. Both theatres were designed by WGR Sprague.

In September 1940, a German bomb landed directly on the Queenâs Theatre, destroying the faÃ§ade and lobby. The production at the time was Daphne du Maurierâs Rebecca starring Celia Johnson, Owen Nares and Margaret Rutherford. The theatre remained closed until a â¤250,000 restoration was completed by Westwood Sons & Partners almost 20 years later. The auditorium retained its Edwardian dÃ©cor while the lobbies and exterior were rebuilt in a modern style. The reconstructed theatre opened on 8 July 1959 with John Gielgudâs ...
»more


Spa Road, SE16
A train left Deptford railway station for Spa Road station at 8am on 8 February 1836 - it was the first train in London In 1770, one Thomas Keyse discovered a natural spring. He had opened a tea garden beside what is now Spa Road, on the banks of the River Neckinger. The fortuitous discovery of a chalybeate spring enabled the gardens to be described as âBermondsey Spaâ. During the 18th century, drinking mineral water was considered good for oneâs health. As a result Bermondsey boomed and led to the development of the health-giving elixir which âSpa Roadâ commemorates. Unlike the tapwater-based spring in the nearby âOnly Fools And Horsesâ Peckham, Bermondsey Spa was the real deal, although it closed in 1804.

The road then spent thirty quiet years until it took its place in London history as the capitalâs first station: Spa Road became the terminus of the London and Greenwich Railway (later the South Eastern and Chatham Railway). Keyseâs tea gardens were roughly situated at the site of the station on the south side of Spa Road.

Paddington
The first underground railway station in the world ran from Paddington on 10 January 1863 as the terminus of the Metropolitan Railway’s route from Farringdon. The first Metropolitan station opened as Paddington (Bishop’s Road) but Paddington station, designed by the celebrated engineer, Isambard Kingdom Brunel had long been the London end of the Great Western Railway.

Paddington had been an important town west of London before it was engulfed by the metropolis. It was first a medieval parish, then a metropolitan borough and finally integrated with Westminster and Greater London in 1965. Also found in Paddington are St Mary’s Hospital (where penicillin was first discovered) and the former Paddington Green Police Station - once the most important high-security police station in the United Kingdom.

Fictionally, Paddington Station has a display case showing Paddington Bear, a character of children’s fiction who, in the book, is first discovered at this station and hence named after it.


Eastminster
Eastminster (The Abbey of St. Mary de Graces) was a Cistercian abbey on Tower Hill and founded by Edward III in 1350. It was located just outside the Roman London Wall. New Abbey was its alternative name.

The abbey was dissolved in 1538, and the site has for centuries been occupied by the London part of the Royal Mint.
»read full article


The 'Royal Blue' horse omnibus outside 5 Euston Road (1912)
The bus carries route information and an advert for Selfridge's. The shops behind, including Boots the Chemist, Stewart & Wright's Cocoa Rooms and the Northumberland Hotel, are covered in advertisements.
»read full article
Bullbaiters Farm
Bullbaiters Farm near Boreham Wood was originally called Bullbeggar's Farm - Bullbeggar meaning 'hobgoblin' or 'scarecrow'. Above the central door was the Byng family crest - onwers of the farm, who were based in Wrotham Park, South Mimms.

In the 1861 census, the occupant of Bullbaiters Farm was 60 year old William King, who farmed 190 acres and employed 3 men and 2 boys. In addition to his family two farm labourers also lived in the farm. Thrift Farm, nearby, was occupied by a farm labourer according to the census - so it may have been used as a farm cottage. Quite often, especially involving what had been smaller tenanted farms, the fields would be combined into a larger farm and the 'redundant' farm house used as farm cottages.
»read full article


Finstock Road, W10
Finstock Road is a turning out of Oxford Gardens. Finstock is an Oxfordshire place name.
»read full article
Avenue Farm
Cowhouse Farm was linked to Hodford Farm in Golders Green for a long period. As Cricklewood suburbanised, the farm became surrounded by housing. Latterly Dickers Farm and finally Avenue Farm, it was closed in 1932.


Lothrop Street (1907)
2015 Postcode of a street in the Queen’s Park Estate
»read full article
Barnet Gate Wood
This small woodland is public open space, owned and managed by Barnet Council. It is a remnant of the extensive Middlesex Forest which covered most of this area after the last Ice Age.

Barnet Gate Wood is a small ancient woodland, with a canopy of oak and hornbeam, and an understorey dominated by rhododendron. Some of the hornbeam are in strange shapes as they were originally trained as hedges and then allowed go wild.

The entrance is by a path from Hendon Wood Lane, near the junction with Barnet Road. There is also access from the Dollis Valley Greenwalk and London Loop, at wooden posts numbered 12 and 13, which are points on the Barnet Gate Wood Nature Trail.

Highwood Hill, NW7
Highwood Hill links the Rising Sun pub with Totteridge. Highwood Hill marks the junction of two ridges, one stretching east to Totteridge and the other south-east through Holcombe Hill to Mill Hill and Bittacy Hill.

âIt is no uncommon thing to see 100 loads of hay go up to London on market day and each of the teams bring back a load of dung for dressing the landâ, writes John Middleton in his "View of the Agriculture of Middlesex" (1798).

Some got rich through hay farming and some built many large mansions along Totteridge Lane, Highwood Hill and The Ridgeway. The landlords of these properties were allowed to enclose fields all over the area and the common lands, where the poor could graze their pigs, cows and geese, became much smaller and fewer, impoverishing those dependent on such land.

Lavish parks were laid out around their mansions, and the resident...
»more