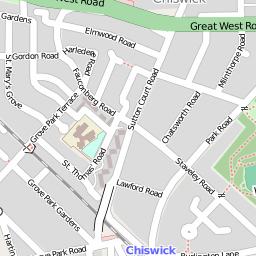 Staveley Road, W4
Staveley Road was the site of the first V2 rocket landing on London. At 18.43 on Friday 8 September 1944, a V2 missile launched from Wassenaar, Netherlands in Holland landed in Staveley Road, near the junction with Burlington Lane.

Sixteen seconds after the V2 attack occurred in Chiswick, another V2 landed in...


Parkleys, KT2
The Parkleys estate was built in the mid-1950s and was Grade-II listed in 1998 The road runs around flat-roofed blocks in either a three-storey H-plan configuration with a central entrance stairwell or a two-storey terraced configuration, enclosing shared courtyards.

The flats have large timber windows which span the length of the flats and distinctive concrete tile-hanging.

The estate is lushly planted with retro-looking foliage and despite the styling being very much of its time, the quality of the design means it holds up today as a fine example of preserved modernist architecture.
»read full article

Kewferry Drive is a private road with houses dating from the 1930s.

The now-closed entrance shaft to Northwood Chalk Mine lies beneath the drive of a bungalow in Kewferry Drive. Brickwork on the entrance shaft dates from the 17th century. The debris heap at the foot of the shaft was excavated and found to contain the complete skeletons of a horse and cow, old tin cans, a complete metal trough, a tin trunk that contained parts of a gin trap, some dissecting needles, parts of a windlass, an excavation tool and two bone implements used for making pins.

The shaft was rediscovered by a Mr Roy in 1946 when, within two days of returning from war service, he fell through the rotted sleepers.
»read full article

After Monckâs death, the local council purchased the road in 1898 and called it New Road. It became Deacons Hill Road in the 1920s.

In the 1930s and 1940s, Deacons Hill was a wealthy area and many people associated with the film industry lived here. The most famous of these was the film producer Herbert Wilcox and the actress Anna Neagle. They helped style Boreham Wood as the British Hollywood.

When the Kensington Hippodrome was in operation before 1841, the grassy mound here formed a sort of natural grand-stand. Given railings since it was a right-of-way, it served as a free vantage point for pedestrians to watch the racing.

The summit of the hill is described by Florence Gladstone as being a point along âUpper Lansdown Terraceâ rather than where the church was later placed.
»read full article