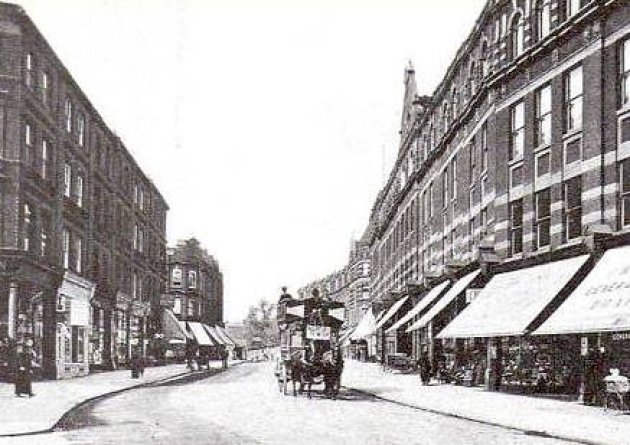 It is bent at a right-angle at the north and south ends where it connects to Finchley Road and Edgware Road respectively. It is possible to trace most of West End Laneâs bends and twists from the earliest maps on the modern street plan.

As late as the 1860s it was still a true country lane with high banks, "hedged irregularly for the greater part of its length, and enshrined too by the embracing branches of the majestic oak, elm and other forest trees, through which a sunny gleam here and there broke." according to Dick Weindling and Marianne Colloms in Kilburn and West Hampstead Past.

West End Lane led westwards from Hampstead and then southwards to Kilburn. Where it took this sharp turn from running west to running south, a hamlet grew up. The hamlet was originally known as "le Rudyng" (indicating a woodland clearing) in the mid-13th century, but by 1534 came to be called West End. It was then a freehold estate belonging to Kilburn Priory, and was so called because it was at the west end of another, larger estate.

By the early 17th century a number of houses were present, and by the middle of that century London merchants were building larger houses in the area, so turning a hamlet into the village of West End.

At the beginning of the 19th century, there were three main large houses around the hamlet of West End: West End House, West End Hall and Lauriston Lodge which were later sold off for redevelopment with the arrival of the railways, which led to the transformation of the area from farmland into housing estates.

In 1879, the Metropolitan Railway adopted the name West Hampstead for its station on West End Lane. Three railway stations were built by three different companies along the length of the road.

With the coming of the railways and of housing, West End Lane became the major shopping street for which it is known to this day.