Wornington Road connected Golborne Road with Ladbroke Grove, though the Ladbroke end is now closed to through traffic. 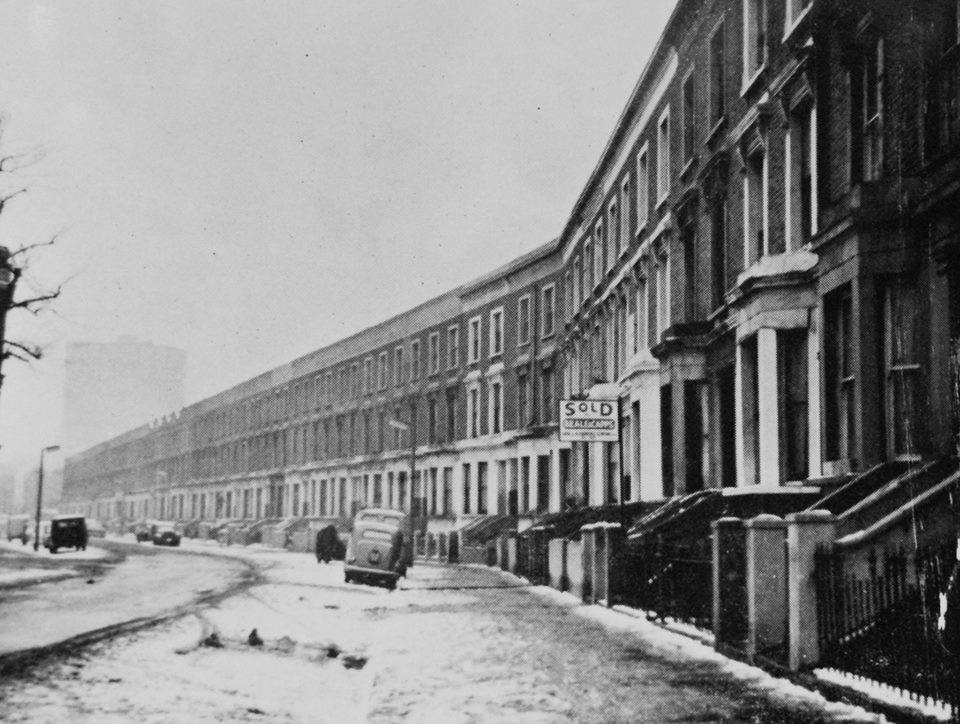 Wornington Road on a snowy day in the 1950s.
Wornington Road was laid out just south of the Great Western Railway and became the site of one of the main schools of the area - Wornington Road School - now Isaac Newton School.

A plan existed, dated March 1865, called a ’Design for Laying out the Portobello Estate for Building Purposes’. The fields lying south of the Hammersmith and City Railway were then being built over and the plan addressed the remaining portion of the ’Portobello Estate’. ’Green Lane Park’ was the name proposed for the new district. This was followed by ’ Portobello Park. and later by ’Upper Westbourne Park’. According to this plan it was proposed to build rectangular streets over the whole area but the scheme was not carried out. It was late in the 1860s before any serious attempt was made to develop this district but, when once set in hand, streets of good-sized, middle-class houses soon covered the cornfield on the site of Wornington (initially proposed as Warnington) Road.

At first it had been intended that Golborne Road should cross Kensal Road and the canal, so as to connect North Kensington with Harrow Road. The Paddington Canal Company stopped this design by placing a footbridge over the canal where no thoroughfare existed. Wedlake Street Bridge, built by the London County Council, afterwards took its place. Had the original plan been carried out probably the whole district would have developed in a radically different way. Between the Great Western Railway and Portobello Road the growth of population was so rapid that the school accommodation provided by churches and chapels was quite inadequate, and Wornington Road School was the first Board-school to be built in North Kensington.

It opened on 2 March 1874. At that time the surrounding streets were inhabited by ’superior mechanics and railway employees’. To a limited extent this character has been maintained. It is difficult to trace the origin of the names of the streets in this quarter. Golbourne, now Golborne Road may be derived from Dean Goulbourne, the vicar of St. Johnâs, Paddington. Swinbrook is probably the name of a person, not, as suggested, the name of the brook which rose close to Portobello Farm. St. Ervanâs Road is named after a holy man whom Prebendary Denison, formerly of St. Michael and All Angels, sought for in vain in the Calendar of Saints.

Originally the junction of Wornington Road and Portobello Road formed a footpath going north. Upgraded into a road, this later became Ladbroke Grove Road and ultimately Ladbroke Grove. The footpath reached Kensal Green by means of footbridges over the Great Western Railway and the canal. This corner where Portobello and Wornington Roads met, was the site of a circus during the 1830s. Later on, donkeys - used on Wormwood Scrubs - were stabled here, and a halfpenny was charged for a ride from one end of Lavie Mews - then situated here - to the other. Its local name was long ’Donkey Mews’.

Post-war redevelopment changed Wornington Road somewhat though many of the original terraces survive.

The Golborne Road end adjoins a street market which is held every day except Sunday, specialising in produce with hot food and bric-a-brac at the weekend.