Raymede Street, after severe bomb damage in the area, disappeared after 1950. 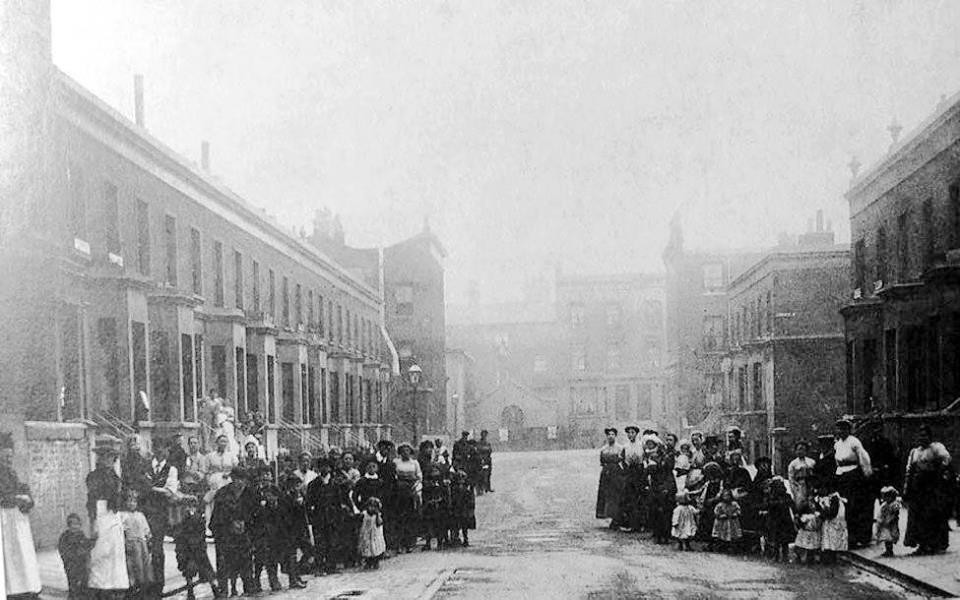 People line up along Raymede Street - occasion and date unknown
For some years after the construction of the Hammersmith and City Railway, cricket fields lay to the north of the railway embankment. Here on one occasion the Notting Hill Flower Show and Home Improvement Society held its Exhibition, and the Duke and Duchess of Teck, accompanied by their young daughter, distributed the prizes. But in the middle seventies a series of residential roads were planned running parallel with the railway, and as these roads were continued east across Ladbroke Grove, they linked up this district with the smaller houses of the Portobello Road area.

The plan of 1865 shows that building plots along the south end of Ladbroke Grove had been leased by Colonel St. Quintin to Charles H. Blake, Esq., who already owned much property on the top of St. Johnâs Hill.

Shortly after the St Michael and All Angels church was opened, the freehold of eleven acres of Portobello Estate was obtained for St Charlesâs College, and by 1874 a handsome range of buildings in red brick and stone, with a central tower, 140 feet high, stood surrounded by a garden and recreation grounds. This college, dedicated to St. Charles of Borromeo, was founded by Cardinal Manning in order to provide education at a moderate cost for Catholic youths.

Marylebone Infirmary was one of the earliest experiments both in taking the sick poor outside the boundaries of their parish and in arranging an Infirmary on purely hospital lines. Only a few wards were occupied when the hospital was opened by the Prince and Princess of Wales. In 1884 Marylebone Infirmary became also a Training School for Nightingale Nurses, financed from the Nightingale Fund.

Besides the large area of the Portobello Estate occupied by these extensive institutions, many builders in a small way of business bought land and put up houses for working-class tenants. Building plots were being taken up by 1877, but the north side of Rackham Street was open ground. The inhabitants were largely laundry-workers and casual labourers, an overflow from Kensal New Town. Edinburgh Road Board-school, now known as Barlby Road School, was placed in 1880 among the half-made streets near the Great Western Railway line ; and children from temporary schools in Kensal Town and at Rackham Street Hall were transferred to the new building.

When the school was first opened pigs were slaughtered in a shed close by, and for many years carpets were beaten on the adjoining open space. On a summer day the noise made by the beaters, and the dust from the dirty carpets, floated in at the open windows of the school.