Ruislip Gardens is on the Central Line, situated between West Ruislip and South Ruislip.

The tracks through the station were laid by part of the Great Western and Great Central Joint Railway with services starting on 2 April 1906 although there was no station at Ruislip Gardens at that time. The station opened on 9 July 1934 at the point where West End Road crossed Yeading Brook.

As part of the 1935-40 New Works Programme, Central line services were projected westwards from a new junction, west of North Acton on the line to Ealing Broadway. The original intention was to extend the service as far as Denham, but work was delayed by World War II and the formation of the Metropolitan Green Belt after the war and so the terminus of the extension was cut back to West Ruislip, with services starting on 21 November 1948.

The main line services stopping at Ruislip Gardens ceased on 21 July 1958 and their station closed, leaving only the Central line services in place.

Gaily into Ruislip Gardens
Runs the red electric train,
With a thousand Taâs and Pardonâs
Daintily alights Elaine;
Hurries down the concrete station
With a frown of concentration,
Out into the outskirtâs edges
Where a few surviving hedges
Keep alive our lost Elysium - Rural Middlesex again 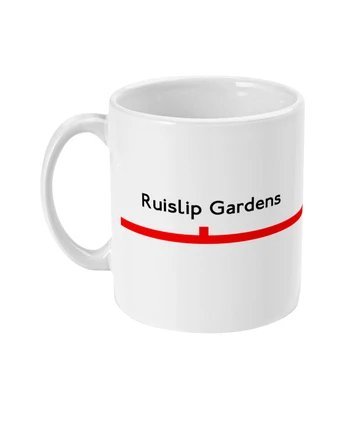