Basing Street was originally Basing Road between 1867 and 1939. 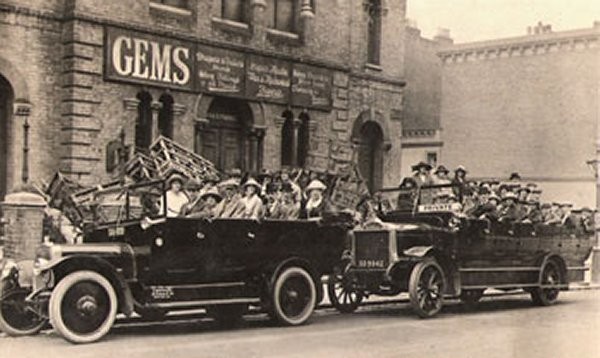 Gems were a wax model makers for Madame Tussaudâs situated on Basing Road (now Street) on corner of Lancaster Road. Here we see the staff setting out on their annual works outing on 8 July 1922.
Basing Street might have acquired its name from the railway developer landowner James Whitchurch from Southampton, near Basingstoke. Alternatively it could have been named in honour of the 16th century landlord, Sir William Paulet or Pawlet, Lord St John of Basing and Marquis of Winchester, Lord High Treasurer in the reign of Elizabeth I.

The foundation stone for a congregational chapel, was laid by the Nottingham Liberal MP Samuel Morley in July 1865, "at a time when all this part was little more than open fields."

Waxwork models produced on Basing Street for Madame Tussaudâs included the local serial killer John Christie from 10 Rillington Place. In the late 1960s the building had another famous reincarnation as the offices and studios of Island Records. Chris Blackwellâs first memory of the premises is being freaked out when he found himself in a room full of dummies. Led Zeppelin began recording their fourth album, including ’Stairway To Heaven’, in the newly opened Island Basing Street studio 2 in 1970, as Jethro Tullâs âAqualungâ album was being recorded in the larger Basing Street studio 1.

In the glam and prog rock years Basing Street was frequented by the likes of Bad Company, ELP, Alex Harvey, Mott the Hoople, Robert Palmer, Roxy Music, Sparks, Traffic and the Average White Band. The studios were also used by such non-Island acts as the Eagles, Genesis, the Rolling Stones and Led Zeppelin. At one point in 1973 the Wailers and the Stones were in the studios at the same time, recording ’Burnin’ and ’Goatâs Head Soup’ respectively.

Bob Marley lived on Basing Street above the Island studios for some time, and his wife Rita of the I-Threes became a longstanding Basing Street resident.