Clifford Gardens is a street just north of the railway at Kensal Rise. 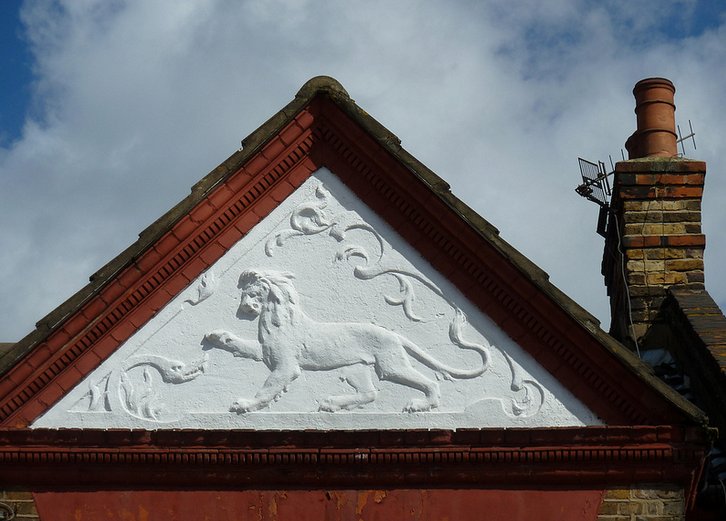 Pediment in Clifford Gardens
Credit: Lee Jackson
The All Soulsâ estate now stretches from Kensal Green to Harlesden. Many of the houses were built by Charles Langler and Charles Pinkham in the last decade of the nineteenth century.

Their most noteworthy houses are those in Clifford Gardens built around 1897, the facades of which are decorated with quaint and curious stucco scenes. These were fashioned by an old Hampstead man employed by Langler and Pinkham.

Clifford Gardens ran originally beyond the southern boundary of the National Athletic Ground.

Kensal Green, site of Englandâs oldest cemetery still in use.

Kensal Green is the site of Kensal Green Cemetery, the oldest English cemetery still in operation, which contains many elaborate Victorian mausoleums, including those of William Makepeace Thackeray and Anthony Trollope.

Kensal Green is now a residential area with good transport links to central London, surrounding districts include Willesden Green to the north, Harlesden to the west, Brondesbury and Queens Park to the east and Ladbroke Grove to the south. The names Kensal Green and Kensal Rise are used somewhat interchangeably by non-residents to denote the same district, although residents differentiate between the areas based on proximity to the local tube and railway stations.

Kensal Green station opened on 1 October 1916 on the New Line on the north side of the existing London and North Western Railway tracks from Euston to Watford.