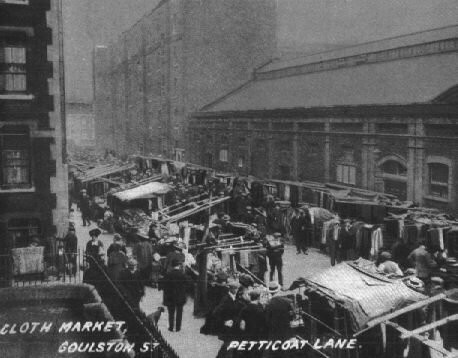 Goulston Street looking north, c.1900. Wentworth Dwellings are in the background.
Goulston Street first appeared as a small passage in the 1730s, but within ten years had been widened and extended as far as Goulston Square, a former garden which sat half way between Wentworth and Whitechapel High Streets. The street was extended further north between 1800 and 1830, this part initially being called New Goulston Street. The âNewâ prefix was soon dropped.

The northern half of the street came under the scrutiny of the Metropolitan Board of Works when the Cross Act of 1875 earmarked it for demolition on account of its dangerous slum tenements. At the same time, properties in George Yard and the Flower and Dean Street area were also suggested for redevelopment. The resulting changes in Goulston Street meant that unsanitary dwellings in Three Tun Alley (on the west side) and Goulston Court (on the east) were wiped out, along with much of the west side of Goulston Street itself.

Most of Brunswick Buildings were destroyed during the Second World War (by a V2 Rocket) but those abutting on New Goulston Street survived.

Conditions in Wentworth Dwellings and the remaining tenements of Brunswick Buildings deteriorated over the course of the 20th century and both were earmarked for demolition in 1967.

Conditions at Brunswick were particularly poor - walls were collapsing and postmen refused to deliver because they had to negotiate piles of rubbish from overflowing bins. Brunswick Buildings were eventually demolished in 1976, although their name is commemorated in Brunswick House which now partly covers the site.

Goulston Street is now one of many streets which take on the overflow from Petticoat Lane and Wentworth Street markets. It is also the site of a number of buildings belonging to London Metropolitan University (59-63 Whitechapel High Street) as well as the location of the famous âTubby Isaacsâ seafood stall.

The Aldgate Exchange pub on the eastern corner with Whitechapel High Street is the venue for meetings of the Whitechapel Society 1888, held in the downstairs âGoulston Dive Barâ.