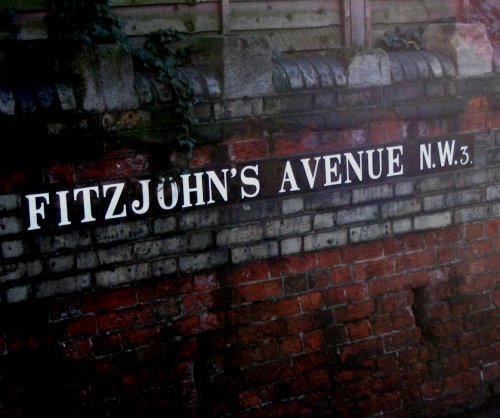 Fitzjohn’s Avenue sign
Before Fitzjohnâs Avenue was built, Hampstead was bounded to the south by a broad belt of green meadows, known as the Shepherdsâ or Conduit Fields, across which ran a pathway sloping up to the southwestern corner of the village, and terminating near Church Row. On the eastern side of these fields wass an old well or conduit, called the Shepherdâs Well, the source of the River Tyburn.

In the early 1870s, it was proposed by some of the inhabitants of Hampstead to purchase a portion of these grassy slopes, and to devote them to public use as a park.

However, in 1871 F. J. Clark had suggested a new road direct to Hampstead and in 1872 Spencer Maryon Wilson was hoping to create a "truly imposing road". In 1875 he contracted with John Culverhouse, who since 1871 had been the tenant at will of the two main demesne farms, to make Fitzjohnâs Avenue, from College Crescent off Finchley Road to Greenhill Road, and to plant ornamental trees.

In 1888, under the Town Improvement Scheme, the alleyways and courtyards cluttering Hampstead Village were cleared, Heath Street was extended and Fitzjohns Avenue created across green fields to provide better access to the West End.

At the same time that the avenue was constructed the Tyburn River - a tiny stream running through the fields, was diverted underground along the length of Fitzjohnâs Avenue.