Marylebone Road is a street in Camden Town. 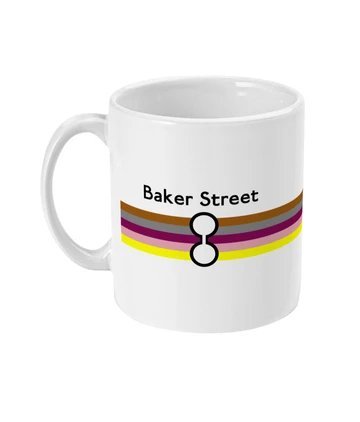 Baker Street tube station is a station on the London Underground at the junction of Baker Street and the Marylebone Road. The station lies in Travelcard Zone 1 and is served by five different lines. It is one of the original stations of the Metropolitan Railway (MR), the world's first underground railway, opened in 1863.

Baker Street station was opened by the MR on 10 January 1863 (these platforms are now served by the Circle and Hammersmith & City lines). On 13 April 1868, the MR opened the first section of Metropolitan and St John's Wood Railway as a branch from its existing route. This line, serving the open-air platforms, was steadily extended to Willesden Green and northwards, finally reaching Aylesbury Town and Verney Junction (some 50 miles/80 km from Baker Street) in 1892.

The Baker Street & Waterloo Railway (BS&WR, now the Bakerloo line) opened on 10 March 1906; Baker Street was the temporary northern terminus of the line until it was extended to Marylebone station on 27 March 1907.

On 20 November 1939, following the construction of an additional southbound platform and connecting tube tunnels between Baker Street and Finchley Road stations, the Bakerloo line took over the Metropolitan line's stopping services between Finchley Road and Wembley Park and its Stanmore branch. The current Bakerloo ticket hall and escalators to the lower concourse were provided in conjunction with the new service.