Cholmley Lodge, a two storeyed stuccoed house, was built in 1813. 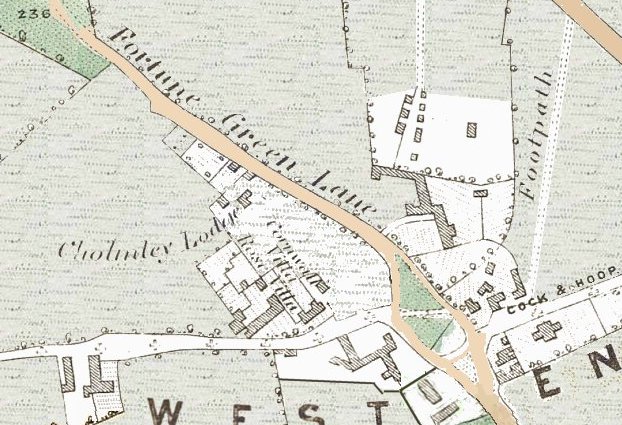 Cholmley Lodge
A National school and cottage for the schoolmistress was built on the north side of the village, on part of the grounds of Cholmley Lodge, in 1844.

In the early 20th century the property came under the ownership of Captain Henry Wilkes Notman, a wealthy Scot who had made his fortune in the railways.

Cholmley Lodge was demolished in 1921. On its grounds was then built seventeen blocks of flats fronting the four boundary roads: Mill Lane, Aldred Road, Hillfield Road, and Fortune Green Road. These blocks were put up between 1922 and 1927 and constituted Cholmley Gardens. Parts of the original lodge are still to be found in the extensive gardens of that latter road.

In particular, the main entrance steps and patio can still be found leading to the tennis court at the northern end of the gardens. Many of the retaining walls within the grounds were built using materials from the original house. Within the walls of the estate, one can find interesting pieces of the old building, including bricks with unusual markings, parts of the old coping stones and pieces of what were once pillars.