Middlesex Street is home to the Petticoat Lane Market. 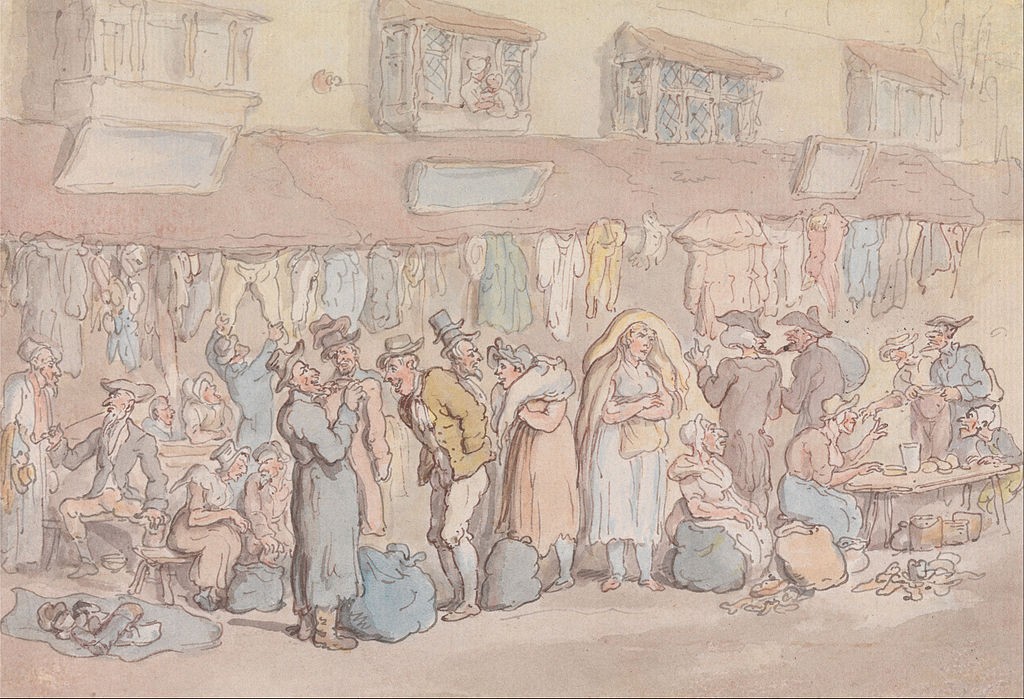 Petticoat Lane in the late-18th- or early-19th-century.
Credit: Thomas Rowlandson
In Tudor times, Middlesex Street was known as Hogs Lane, a pleasant lane lined by hedgerows and elms. It is thought city bakers were allowed to keep pigs in the lane, outside the city wall; or possibly that it was an ancient droving trail.

The lane’s rural nature changed, and by 1590, country cottages stood by the city walls. By 1608, it had become a commercial district where second-hand clothes and bric-Ã -brac were sold and exchanged, known as ’Peticote Lane’. This was also where the Spanish ambassador had his house, and the area attracted many Spaniards from the reign of James I. Peticote Lane was severely affected by the Great Plague of 1665; the rich fled, and London lost a fifth of its population.

Huguenots fleeing persecution arrived in the late 17th century; many settled in the area, and master weavers settled in the new town of Spitalfields. The area already had an association with clothing, with dyeing a local industry. The cloth was pegged out on hooks in the surrounding fields. These were known as tentergrounds.

From the mid-18th century, Petticoat Lane became a centre for manufacturing clothes.

The market served the well-to-do in the City, selling new garments. About 1830, Peticote Lane’s name changed to Middlesex Street, to record the boundary between Portsoken Ward, in the City of London, and Whitechapel, which coincided with the Lane. But the old name continues to be associated with the area.