Earlâs Court Farm is pictured here as it was in 1867, before the opening of the underground station two years later. 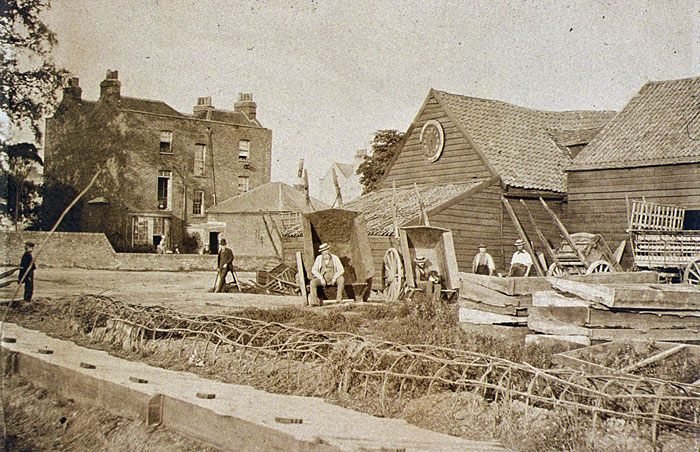 Earl’s Court Farm (1867)
There was no church or ancient nucleus in Earlâs Court, although a malthouse or brewhouse belonging to a Matthew Child had stood somewhere near the present No. 185 Earlâs Court Road in about 1683â1703. The Rocque map of 1741â6 shows little building in the locality. What it does show is three paths coming from the north-east and east, corresponding very roughly to Marloes Road and (still more roughly) Cromwell Road and the line of Harrington Road and Harrington Gardens.

These converged towards the manor house and farm of the manor of Earlâs Court on the other side of Earlâs Court Road and in doing so brought potential customers past a well-placed tavern, the White Hart, which since at least 1722 had stood back from but facing Earlâs Court Lane, in what is now Hogarth Road, slightly forward and west of No. 2. It survived, not much modernised until 1869.

It was one of the last areas of southern Kensington to be developed. The farm, under several generations of the Hutchins family, had been a very successful arable farm and market garden. Mr Alloway, a market gardener, took over in 1844 and can be seen here wearing a bowler hat with some of his workers including Mr Goddard and Mr Ives. The building in the background is the Manor House.

The image dates from the mid 1860s. Urban influences were creeping down the lane from Kensington High Street although the men in the picture seem unconcerned. The Manor House and the farm were demolished in the mid-1860s when the first Earls Court Station was built.

The last remnants of Earlâs Court Farm were removed in October 1878.