The Apollo pub was located at 18 All Saints Road, on the southeast corner of the Lancaster Road junction. 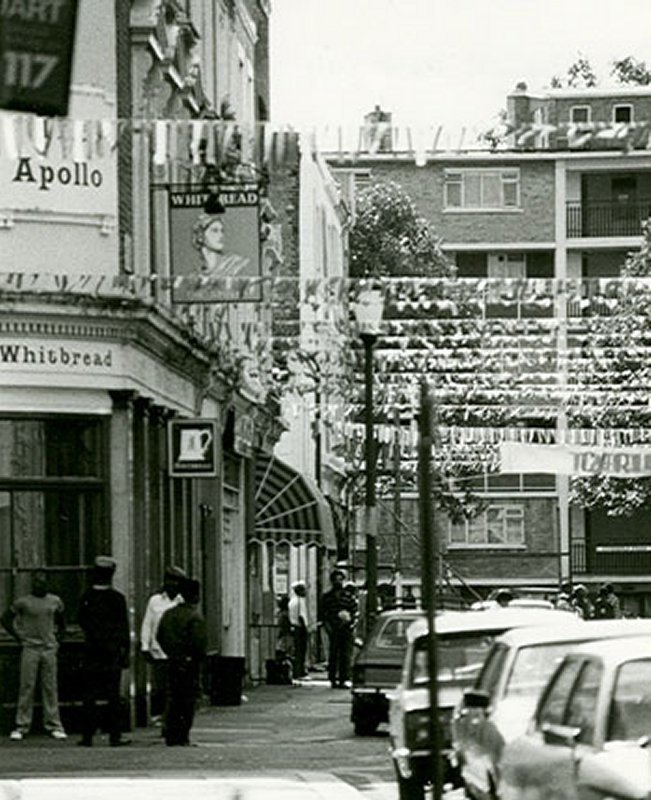 The Apollo in the 1980s
It was first listed as a pub, having been built as such in 1869. The first licencee was Mr Edward Ashley.

Until after the Second World War, the pub was a typical Victorian-stlye boozer, just like many others throughout London.

In the 1950s, All Saints Road became a centre for the local West Indian population with the pub at its heart - it was possibly the first pub in Notting Hill where black people were able to be served without hassle.

In 1964, Ringo Starr was across Lancaster Road from the Apollo (on the north east corner) in the Beatles film âA Hard Dayâs Nightâ. Ringo first appears on St Lukeâs Road. From there heâs chased by two screaming girls down Lancaster Road to All Saints Road, where he goes into a second hand clothes shop and comes out in beatnik disguise.

When All Saints Road became part of the heart of the Notting Hill Carnival, the Apollo obtained a bit of a reputation.

After a riot in 1983, the Notting Hill Housing Trust converted the pub into small business black co-op workshops in 1987, including the Mangrove/Metamorphosis/Apollo recording studios where All Saints (the group) was formed.

Some 30 years after its heydey, the Apollo is no more. It first became a recording studios but, being now in trendy Notting Hill, the building is more valuable as real estate than it ever was as a pub.