Nether Street was recognised by the mid-14th century as an old street, sometimes called âLower Streetâ. 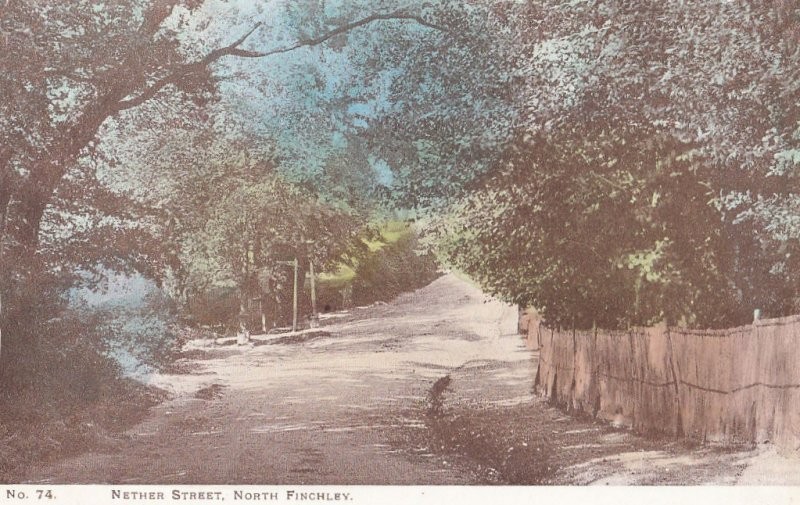 Nether Street
Old London postcard
Nether Street was a link road from the main roads to Finchley properties such as Moss Hall and Brent Lodge. It was already called Nether Street by 1365 and âle lower streetâ in 1622. It was linked at both ends to Ballards Lane. Coles Lane, first mentioned in 1393 may have been the southern link. About 1867 the northern section was named Mosshall Lane.

By the time of the 1851 census, Nether Street had 17 houses, including Elm Place, Sellars Hall, Brent Lodge, Long Lodge, and Courthouse Farm, and housed two fund-holders, two members of the stock exchange and two solicitors.

West of Nether street is Dollis Brook, a tributary of the Brent. The viaduct carrying trains between Mill Hill East and Finchley Central was designed by Sir John Fowler and is the highest point above sea level on the London Underground.

The large house which is now Finchley Golf Club (here since 1929) was originally called Nether Court. This is one of the largest of the old houses in the borough and was built in 1883 for Mr Henry Thomas Tubbs, a Justice of the Peace. It was purchased by Hendon Urban District Council upon his death in 1917

Nether Street was the childhood home of the actor Terry Thomas. He received some of his early education at Fernbank School in Hendon Lane.

Brent Lodge was built on land which had been part of Warrenâs Gift, a charitable estate, sometime between 1817 and 1824. The house was demolished in 1962 despite efforts by the comedian Spike Milligan.