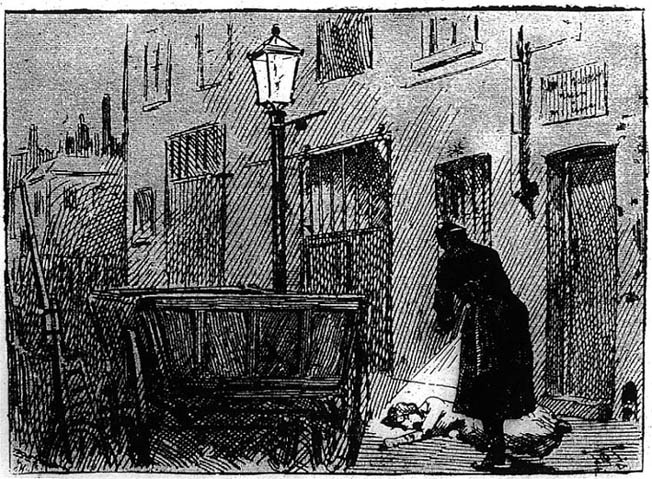 Discovery of the body of Alice McKenzie, Castle Alley, from the Penny Illustrated Paper, July 1889.
Credit: Penny Illustrated Paper
Castle Alley appears (though unnamed) in maps as early as 1676, joining Castle Street via a narrow passage to Whitechapel High Street. By the mid-18th century, Castle Street had been given the âOldâ prefix and the future Castle Alley was known as âMoses and Aaron Alleyâ a name it appears to have kept until c.1800. In 1830, it appears as âCastle Courtâ. The name Castle Alley was certainly in use by the mid-19th century.

The Whitechapel Wash House (built 1846-51 in Goulston Street) backed onto Castle Alley, which at this time was extremely narrow and entered via a covered archway from Whitechapel High Street. Castle Alley was lined on its west side by warehouses and the Wash House and on its east side by smaller properties. The confluence of the alley and Old Castle Street took the form of a sharp bend which was to be the site of the Old Castle Street Board School, built 1873. The narrowest part of the alley was also earmarked for widening in 1876 as part of the Cross Act (a slum clearance scheme).

The body of Jack the Ripper victim Alice McKenzie was found on the west side of Castle Alley by PC Walter Andrews at 12.50am om 17 July 1889, lying near some market tradersâ carts, just to the south of the Wash House.

Soon after the murder (1890), properties on the east side at the junction with with Whitechapel High Street were demolished, although there were still concerns as to the narrowness of the entrance in the 1900s. It was properly widened c.1908.

By 1916 it had been renamed as part of Old Castle Street. By the 1930s, the Board School had been replaced by LCC flats (Herbert House) and a walkway had been constructed across the street as part of the Brooke Bond tea warehouses on the west side.

War damage on the eastern side led to the redevelopment of adjacent Newcastle Street and other small thoroughfares, resulting in the construction of the New Holland estate (Bradbury House, Ladbroke House and Denning Point) between 1965 and 1971[14]. Pommell Way now provides a direct link from Old Castle Street to Commercial Street.

The Wash Houses were redeveloped in 1998 and now form part of the London Metropolitan Universityâs Womenâs Library (opened 2002).