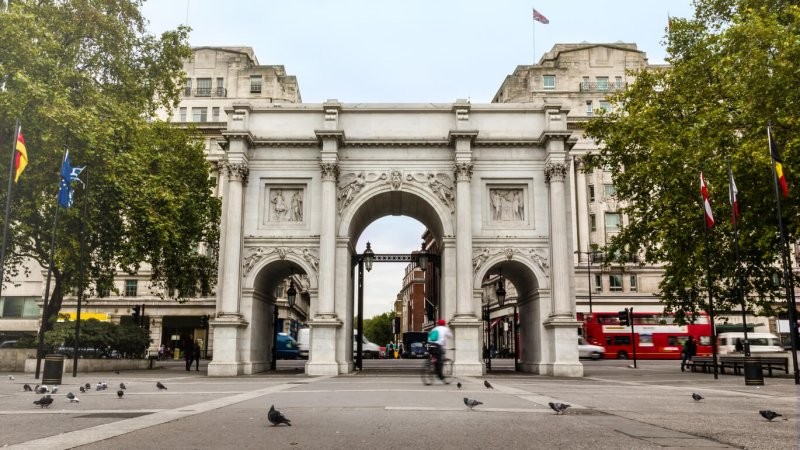 Marble Arch, 2016
Credit: http://en.wikipedia.org/w/index.php?curid=352348
The structure was designed by John Nash in 1827 to be the state entrance to the cour dâhonneur of Buckingham Palace; it stood near the site of what is today the three-bayed, central projection of the palace containing the well known balcony. In 1851 it was relocated and following the widening of Park Lane in the early 1960s is now sited, incongruently isolated, on a large traffic island at the junction of Oxford Street, Park Lane and Edgware Road.

Historically, only members of the Royal Family and the Kingâs Troop, Royal Horse Artillery are permitted to pass through the arch; this happens only in ceremonial processions.

Nashâs three arch design is based on that of the Arch of Constantine in Rome and the Arc de Triomphe du Carrousel in Paris. The triumphal arch is faced with Carrara marble with embellishments of marble extracted from quarries near Seravezza.

John Flaxman was chosen to make the commemorative sculpture. After his death in 1826 the commission was divided between Sir Richard Westmacott, Edward Hodges Baily and J.C.F. Rossi. In 1829, a bronze equestrian statue of George IV was commissioned from Sir Francis Chantrey, with the intention of placing it on top of the arch.

Construction began in 1827, but was cut short in 1830, following the death of King George IV. The rising costs were unacceptable to the new king, William IV, who later tried to offload the uncompleted palace onto Parliament as a substitute for the recently destroyed Palace of Westminster.

Work restarted in 1832, this time under the supervision of Edward Blore, who greatly reduced Nashâs planned attic stage and omitted its sculpture, including the statue of George IV. The arch was completed in 1833.

The white marble soon lost its light colouring in the polluted London atmosphere. In 1847, Sharpeâs London Magazine described it as "discoloured by smoke and damp, and in appearance resembling a huge sugar erection in a confectionerâs shop window."

Buckingham Palace remained unoccupied, and for the most part unfinished, until it was hurriedly completed upon the accession of Queen Victoria in 1837. Within a few years the palace was found to be too small for the large court and the Queenâs expanding family. The solution was to enlarge the palace by enclosing the cour dâhonneur with a new east range. This facade is today the principal front and public face of the palace and shields the inner facades containing friezes and marbles matching and complementing those of the arch.

When building work began in 1847, the arch was dismantled and rebuilt by Thomas Cubitt as a ceremonial entrance to the northeast corner of Hyde Park at Cumberland Gate. The reconstruction was completed in March 1851. A popular story says that the arch was moved because it was too narrow for the Queenâs state coach to pass through, but, in fact, the gold state coach passed under it during Elizabeth IIâs coronation in 1953.

Three small rooms inside the rebuilt arch were used as a police station from 1851 until 1968.

The arch gives its name to the area surrounding it, particularly the southern portion of Edgware Road and also to the underground station.

Marble Arch station was opened on 30 July 1900 by the Central London Railway.