Sloane Square forms a boundary between the two largest aristocratic estates in London, the Grosvenor Estate and the Cadogan.

The square was formerly known as ’Hans Town’, laid out in 1771 to a plan of by Henry Holland Snr. and Henry Holland Jnr. Both the square and Hans Town were named after Sir Hans Sloane (1660â1753), whose estates owned the land at the time.

The square has two notable buildings. Peter Jones department store designed by Reginald Uren of the firm Slater Moberly and Uren in 1936 and now a Grade II* listed building on account of its early curtain wall and modernist aesthetic, pioneering in the UK for a department store. The building was carefully restored 2003-2007 with internal upgrading in line with the original designs by John McAslan and Partners. This included making the three storey atrium full-height.

The other is the Royal Court Theatre first opened in 1888 which was important for avant-garde theatre in the 1960s and 1970s when the home of the English Stage Company.

100 metres from the Square in Sloane Terrace, the former Christian Science Church was built in 1907 and converted in 2002 for concert hall use as Cadogan Hall. It is now one of London’s leading classical music venues.

In the early 1980s, the square lent its name to the "Sloane Rangers", the young underemployed, often snooty and ostentatiously well-off members of the upper classes. On the northern side of the square is the Sloane Square Hotel. 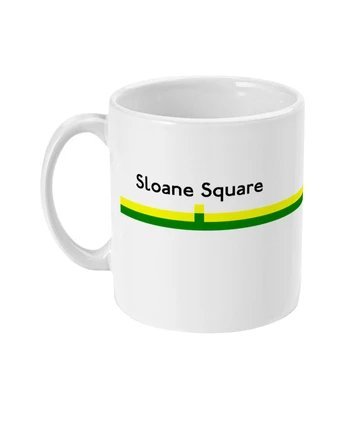 Sloane Square station was opened on 24 December 1868 by the Metropolitan District Railway when the company opened the first section of its line.

The construction of the station was complicated by the crossing of the site by the River Westbourne which ran through Hyde Park as the Serpentine Lake, and was originally crossed by the Knight's Bridge at Knightsbridge. The river was carried above the platform in a large iron pipe suspended from girders. It remains in place today

Meanwhile, Sloane Square itself lies at the east end of the trendy King's Road and at the south end of Sloane Street.
In the early 1980s, it lent its name to the Sloane Rangers, the young underemployed and ostentatiously well-off members of the upper classes. Lady Diana Spencer, before she become Princess of Wales was considered the epitome of a Sloane Ranger.