The Gaumont State Cinema is a Grade II listed Art Deco theatre. While it still exists, it is no longer a cinema. 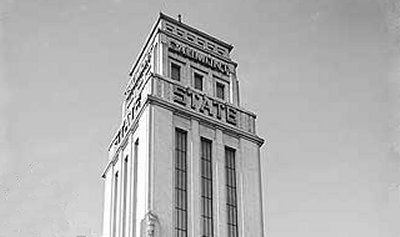 Gaumont State in its heyday.
Designed by George Coles and opened in 1937, the Gaumont State was one of the biggest auditoria in Europe, with seating for 4004 people.

The name "State" is said to come from the 37 metre tower, inspired by the Empire State Building in New York City. It can be seen for miles around, and bears the name "STATE" in large red neon letters.

The interior was designed in the opulent style of cinemas of the day, and includes a Wurlitzer organ which is today one of the largest fully functioning Wurlitzer organs in Britain. It is also one of the few cinema organs remaining in their original locations.

The Gaumont State Theatre was opened by Gaumont Super Cinemas on 20 December 1937 with an âAll Star Variety Showâ on stage, with stars appearing including Gracie Fields, Larry Adler, George Formby and Henry Hall & his Band and the opening was broadcast live on the BBC radio. The variety show had a five days run, then the Gaumont State