Chalkhill Estate was one of three large estates built in the London Borough of Brent. The design was based on that of Park Hill in Sheffield. 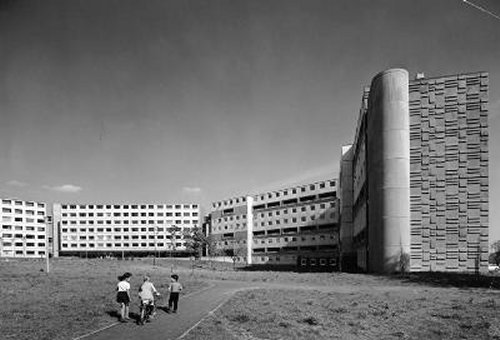 Chalkhill Estate
Credit: John McCann, Courtesy of Brent Archives
Chalkhill Estate was developed as a Metroland estate from 1921 but it was between 1966 and 1970 that the high density, high rise council estate providing flats, shops, a medical centre, car parking and open space was developed. There were low rise two-storey developments such as Buddings Circle and Wellsprings Crescent and 30 high-rise 'Bison' built blocks linked by 'walkways in the sky'.

In total there were about 1900 houses and flats.

Chalkhill Estate also contained a number of recreational facilities for children and the elderly almost at every corner such as slides, seating areas with flower beds, climbing frames and other such things you would expect to find in a public park.

Dwellings on the high-rise estate comprised single-storey one / two bedroom flats and larger two-storey family homes and were located along corridors or walkways affectionately called Goldbeaters Walk, Greenrigg Walk, Redcliffe Walk and Bluebird Walk. The dwellings were all-electric utilizing what was then state-of-the-art technology; central heating was available in all homes and all homes contained what was called a "Garchey", a manually operated waste disposal system located in the kitchen sink.

The architect's vision of contented tenants living in harmony and connected by these 'walkways in the sky' might have seemed like some kind of aerial utopia but the reality was very different. During the mid 1970s those drafty 'walkways in the sky' quickly became convenient escape routes for criminals and Chalkhill Estate was becoming known as a crime hot-spot attracting any number of unsavoury characters from neighbouring areas. Often but not always football hooligans would visit the estate after matches at the nearby Wembley Stadium vandalising property and buildings and attacking local residents. Milkmen who had previously delivered to residents doorsteps using hand-pulled milk-floats via service lifts had restricted their operations due to the high number of robberies. Lifts when they were operational, constantly stank of urine so that it was preferable to walk up dozens of flights of poorly lit concrete stairs. The two high-rise car parks became a hiding place for stolen cars and shady drug-deals. The local shops were regularly robbed.

The recreational facilities due to poor maintenance and vandalism also deteriorated rapidly. Areas like the paddling pool, adjacent to the shops and the sandpit - both of which were popular in the summer as a meeting place for parents and children, became dangerous due to presence of quantities of broken glass. The flower beds and seating ares for the elderly were destroyed as fast as they were repaired. Gradually one by one, these facilities were decommissioned, some removed and replaced by other facilities only to become vandalised once again.

In 1980s, widespread concern about the conditions on the estate including poor quality and crime which led to a number of initiatives that included door entry systems and walkway closures. Years of notoriety and poor living conditions led to a decision of demolition and remediation stages of the final 450 house scheme.

The 1900 houses and flats were eventually demolished and Chalkhill Estate was refurbished early 2000.

Over the years the estate has dramatically tried to shake off its poor image to little avail.

When the UEFA European Football Championship was held at Wembley in 1996, a large staircase was constructed leading down from the 1948 extension and under the newly-built Bobby Moore Bridge, which had opened in 1993. This was intended as a temporary structure and remained in its unfinished state until 2004, when extensive work began on the station in conjunction with the reconstruction of Wembley Stadium. Additional facilities were provided to handle event crowds, and the staircase was completed in time for the opening of the new stadium in 2007.

The lower yard at cottages of Blackbird Hill Farm on Old Church Lane, c.1880.
Credit: Brent Archives
Licence: CC BY 2.0
To View or share the image, go to its dedicated web page