Thorplands was an estate south of Mill Lane. 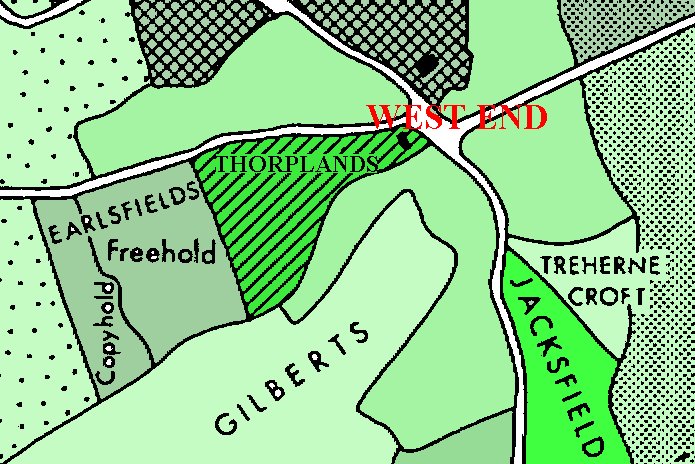 Thorplands
Credit: User unknown/public domain
There was a house on the estate possibly by 1244. Then called Rudyng, Thorplands had been leased to William Wylde in 1534 and was part of the lands granted to Warwick in 1547.

Thorplands was after that owned by John Thorpe of St Martins in the Fields, Surveyor General to Queen Elizabeth I. His home village was Kings Cliffe, Northamptonshire. He lived for most of his adult life in the parish of St Martinâs in the Fields, and died in February 1654/5 in Covent Garden. He was buried at St Paulâs, Covent Garden on 14 Feb 1654/5. He did not leave a will, or if he did it has not survived.

His son went for most of his life by the name of John Greene alias Thorpe, which probably indicates illegitimacy and has thrown researchers off his scent. He was almost certainly the eldest of the family, probably born to Rebecca Greene, first wife of John senior, before their marriage. He clearly inherited property that had been his fatherâs, so he must have been acknowledged as his own son by John senior. John Greene alias Thorpe died in 1687 and did leave a will (under the name John Thorpe) dated 19 June 1683. He was buried at St. Martinâs in the Fields on 20 November 1687.

The will mentions significant property in various counties, including property he owned in Hampstead, which he left to his widowed daughter-in-law Elizabeth Thorpe, but it does not mention Thorplands by name.

Thorpe left his freehold lands to trustees for his grandson, John Thorpe also of St Martin’s.

By 1762, Thorplands was an 18 acre freehold estate with a house at West End. It was described as a tithe-free freehold owned by âMr. Draperâ. When Elizabeth Draper died in 1771, her copyhold property descended to her son John but the freehold estate was held in 1767 and 1771 by Mrs Robinson and later by Thomas Fentham. John Thomas Fentham was the owner in 1841 and Thomas Potter in the 1860s and 1870s when building began.

Another 28 houses and a Methodist church were built on the estate fronting Mill Lane in 1886-7 and seven blocks of flats in West End Lane on what was called the Cedars estate in 1894.

Acknowledgement: Thanks to Michael Lee and Bob Page for information supplied about John Thorp.