Lauriston Lodge, now the site of Dene Mansions, was a large house in West Hampstead. 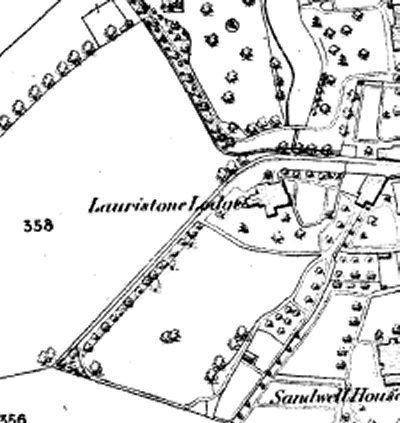 Lauriston Lodge on an 1870s map
Credit: Reproduced from the 1871 Ordnance Survey map.
Germain Lavie, J.P. was a lessee of Lauriston Lodge and some 11 acres, part of Gilberts estate, from 1806. The house, later occupied by Sir William Woods, Garter King-at-Arms, was of red brick with stained-glass windows and a fine entrance.

Despite being situated just to the west of West End Lane, Lauriston Lodge had its own access - a path called Sweetbriar Walk which ran all the way to the Edgware Road before the Midland Railway tracks were laid.

In 1881, Dennington Park Road was constructed on the line of Sweetbriar Walk and 58 houses were built there between 1883 and 1888.

Three blocks of flats, named Dene Mansions after Little Dene, home of the Ripley family who had been the final owners of the house, replaced Lauriston Lodge in 1904.

Lauriston Lodge on an 1870s map
Reproduced from the 1871 Ordnance Survey map.