Westway is the A40(M) motorway which runs on an elevated section along the W10/W11 border. 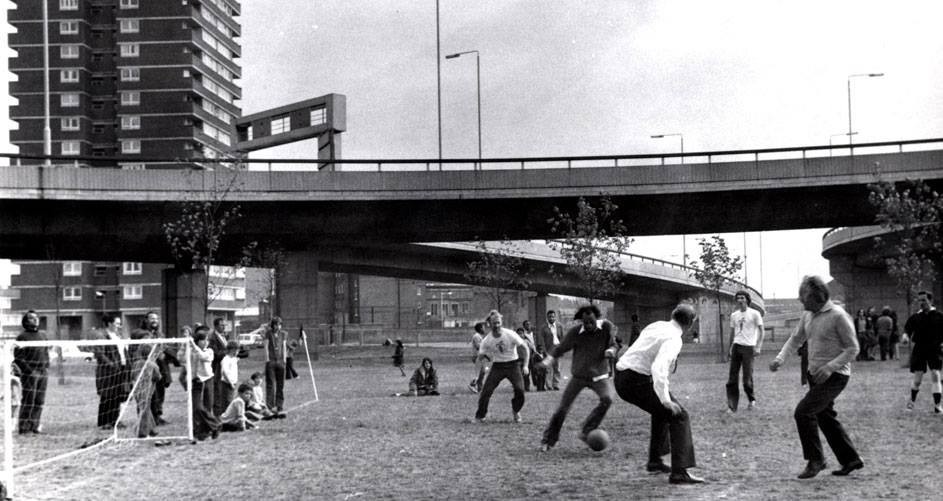 On 28 July 1970 the Westway, A40 Western Avenue Extension flyover between White City and Paddington, at two and half miles, the longest elevated road in Europe at the time, was opened by Michael Heseltine, the parliamentary secretary to the transport minister. The opening ceremony was famously accompanied by a protest over the re-housing of the last residents alongside the road. As demonstrators disrupted the ribbon cutting, a banner was unfurled on Acklam Road, looking on to the flyover, demanding: âGet Us Out of this Hell. Re-house Us Nowâ.

When the Portobello farmhouse was painted in 1864, shortly before its demise, the only other building on the lane north of the newly opened Hammersmith and City railway line was the Notting Barn Lodge at the future junction of Cambridge Gardens. Florence Gladstone wrote in âNotting Hill in Bygone Daysâ: âThere seems to be a natural break where the railway embankment crosses Portobello Road. At this point the old lane was interrupted by low marshy ground, overgrown with rushes and watercress.â But within a few years of the painting the last remaining fields of Portobello farm would become the streets of the Golborne ward.

Alongside the railway line boundary of the Golborne and Colville wards, Acklam Road was built in the late 1860s and stood for a hundred years, before being demolished to make way for the Westway flyover in the late 1960s. The road took its name from the Acklam village, now in Middlesborough, which like Rillington and Ruston is close to the Yorkshire country seat of the North Kensington developer Colonel St Quintin.

The old street featured the Duke of Sussex, an HH Finch pub on the corner of Portobello Road, on the site of the open-air market area by the entrance to the Acklam Village farmers market. At the beginning of the 20th century, on Charles Boothâs âLife and Labour of the People of Londonâ map, conditions on Acklam Road were assessed as fairly comfortable. In the 1914 street directory the south side was occupied by a laundry, coal dealer, loan office, greengrocer and general dealer, bootmaker and news vendor. On the north side there was a timber merchant, builders, French polisher, bricklayer, chandlerâs shop, confectioner, beer retailer and tobacconist. In the 1930s there was the Pembroke Athletic Club boxing gym by the railway footbridge, and by the 1960s the scrap merchants Acklam Metals were established at number 20.

During the four years of construction work, for the remaining inhabitants of the north side of Acklam Road and the other surviving terraces close to the flyover, âcontinuous noise and dirt from heavy lorries and machinery became a familiar and unwelcome part of life.â The sound of the Westway being built was described by Eileen Wright in âTaking on the Motorwayâ: âThere was a terrible noise for weeks when they were pile-driving. They started at 6 Oâclock in the morning â sometimes it went on all night. You think the whole city is being bombarded beneath you.â

As 47,000 vehicles a day began âcruising through the rooftops of North Kensingtonâ, negotiations between the Motorway Development Trust and the Council resulted in the inauguration of a new trust with a half-Council/half-community management committee in 1971. Anthony Perry, the first director of North Kensington Amenity Trust, was a former film producer who had worked on the Beatlesâ âYellow Submarineâ.

The North Kensington Amenity Trust is now the Westway Development Trust and was founded in 1971 to reclaim and develop the area beneath Westway for local community use. Since 2000 local charity Urban Eye has initiated a programme of cleaning, painting, and lighting to brighten up and improve the safety of the areas under the flyover structure.