George Street was a street running north-south from Flower and Dean Street to Wentworth Street, crossing Thrawl Street approx. half way along its length.. 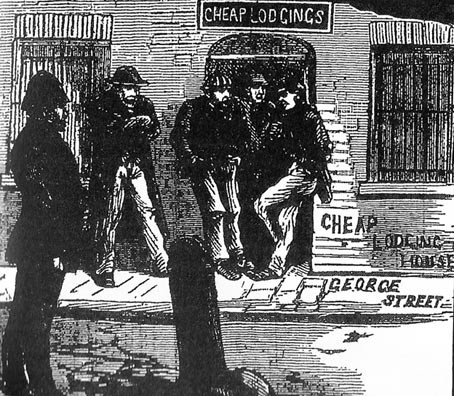 As with the other streets in the neighbourhood, it had become known for its common lodging houses by the 1880s.

George Street was at the centre of the Flower and Dean Street rookery and consequently its slum buildings were completely demolished to make way for the Charlotte De Rothschild Dwellings and Lolesworth Buildings on its west side (1886), Ruth and Helena Houses (1895-7) on the east side and finally Keate and Spencer Houses (1908) also on the east side.

After the demolition of the model dwellings (1973-80) and the building of the Flower and Dean Estate (1982-4) Lolesworth Street ceased to exist, though the present Flower and Dean Walk marks the approximate route. The Rothschild Buildings arch to the south of the estate stands at the former junction of George and Wentworth Streets.