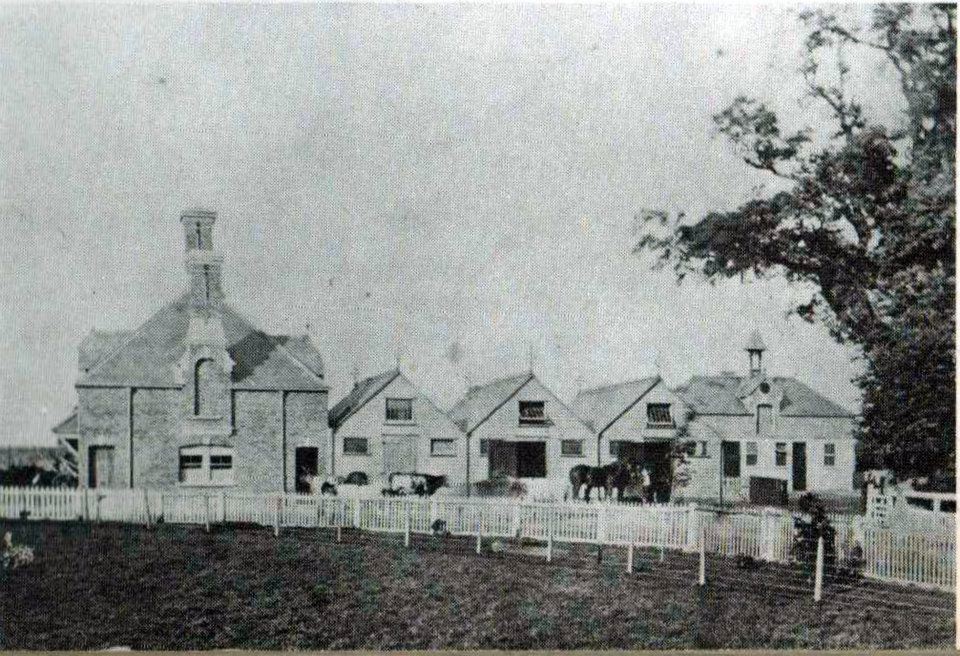 Goldbeaters Farm in 1877 - demolished in 1928 and where Goldbeaters Grove stands today
Credit: User unknown/public domain
The Goldbeaters estate may have originated in a grant of land and rent by John le Bret to William of Aldenham, goldbeater of London, in 1308. John Goldbeater held a house and some land of the manor of Hendon in 1321.

The Goldbeaters estate was held by John and Eve Clerk in 1434. By the early 18th century it had passed to Joseph Marsh, whose daughter and heir married Thomas Beech of London, the holder of 130 acres in the north of Hendon parish in 1754. After Beechâs death in 1772 some of the property was conveyed to John Raymond and later to Richard Capper.

In 1802 Mary Capper of Bushey (Herts.) and Robert Capper sold the whole of Goldbeaters to William Smith of Mayfair, who bought two closes called Staines and Shoelands, adjoining the farm, from John Nicholl of the Inner Temple in 1803 and a house, later the Bald Faced Stag, and four fields at Redhill from William Geeves in 1807. William Smith bought part of the near-by Shoelands Farm from John Nicholl of the Hyde in 1812 and purchased the rest from Jasper Holmes of Blackheath in 1821. In 1828, the farm measured 312 acres.

In the 1860s, James Marshall, would only allow the Midland Railway Company to lay tracks through the farm if he could stop trains at his own discretion, a right which he never exercised.

After Marshallâs death in 1893 his son James C. Marshall sold Goldbeaters and Bunns farms to A. O. Crooke, a Hendon brewer, who sold them in 1900 to Sir John Blundell Maple of Orange Hill House. In 1924 the property, totalling 200 acres, was bought by the L.C.C. as a site for the Watling housing estate.