Haines Street was named after the speculating solicitor, Frederick Haines, who built it in 1862.

The street ran south east from Nine Elms Lane until 1970.

Two side streets came off of the street: Tweed Street and Arden Street. It had one notable pub, the Prince Alfred situated at 15 Haines Street. The eastern boundary of the street was the vast London Gas Light & Coke Co. works.

In 1971, the New Covent Garden Market was sited on top of the old street and it ceased to be. 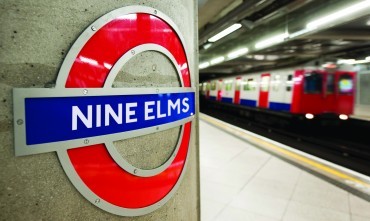 Nine Elms is a planned London Underground station to be built in Nine Elms, Battersea.

It is to be served by the Northern line as part of a two-station extension from Kennington to serve the redevelopment of Battersea Power Station. It will serve as the intermediate for the new branch. The station will be the nearest station to the New Covent Garden Market.

The station was given the final approval by the Secretary of State for Transport in November 2014 with it projected to open along with Battersea Power Station tube station and the whole extension by 2020.

Construction began in 2015. In mid-February 2017 the two large tunnel boring machines were delivered to the Battersea construction site, and lowered to tunnel level by a large crane. The boring machines have been named Helen and Amy following a competition amongst local school children.

Battersea Power Station and Nine Elms tube stations will be located in Zone 1. Trains from Battersea will only run via Charing Cross as the branch will be extended off the Kennington Loop.

The station will be designed and built by Ferrovial Agroman Laing OâRourke.