Aldgate was the easternmost gateway through the London Wall leading from the City of London to Whitechapel and the East End. 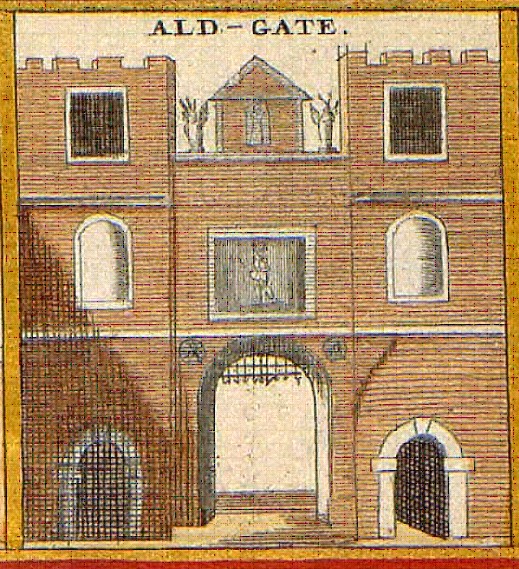 "Alders-gate", a crop of a 1690 map of London with boxed illustrations of the gates of below plan of city
Credit: User unknown/public domain
It gives its name to a City ward bounded by White Kennet Street in the north and Crutched Friars in the south, taking in Leadenhall and Fenchurch Streets, which remain principal thoroughfares through the City, each splitting from the short street named Aldgate that connects to Aldgate High Street.

It is thought that a gate at Aldgate spanned the road to Colchester in the Roman period, when London Wall was constructed. The gateway â which probably had two circular towers â stood at the corner of the modern Dukeâs Place, on the east side of the City, with a busy thoroughfare passing through it. It was rebuilt between 1108 and 1147, again in 1215, and reconstructed completely between 1607 and 1609 âin a more classical and less functional styleâ. Like Londonâs other gates, Aldgate was âfortified with porticullises and chainedâ in 1377 due to concerns about potential attacks by the French. The gate was finally removed in 1761; it was temporarily re-erected at Bethnal Green.

Aldgate did have defensive functions, and, between its early 13th and early 17th-century reconstructions, was breached on only two occasions. The first occurred during the Great Rising in the summer of 1381 when thousands of insurgents from surrounding region, assisted by sympathizers within and without, entered the City through Aldgate. The second breach came in the summer of 1471 when troops led by the Bastard of Fauconberg forced open the gate. According to Chaucer scholar Paul Strohm, the assault was only successful âby the design of Aldgateâs defendersâ: after a number of Fauconbergâs men were allowed to gain entry, the gateâs "portcullis was lowered to trap them inside, where they were taken and slain".

The Augustinians priory of Holy Trinity Aldgate was founded by Matilda, the wife of King Henry I, in 1108, on ground just inside the gate.

While he was a customs official, from 1374 until 1386, Geoffrey Chaucer occupied apartments above the gate, where he wrote some of his poems.

Within Aldgate ward, a short distance to the north of the gate, Jews settled from 1181, until their expulsion in 1290 by King Edward I. The area became known as Old Jewry. Jews were welcomed back by Oliver Cromwell, and once again they settled in the area, founding Londonâs oldest synagogue at Bevis Marks in 1698.

In about 1420 the Whitechapel Bell Foundry was founded in Aldgate, but it later moved to nearby Whitechapel. The foundry continued to supply bells to churches in the City, including the rebuilt church of St Botolph Without Aldgate in 1744.

In his Survey of London (1598), John Stowe wrote that Aldgate, âhath had two pair of gates, though now but one; the hooks remaineth yet. Also there hath been two portcullisses; the one of them remaineth, the other wanteth, but the place of letting down is manifestâ.

At Aldgateâs junction with Leadenhall Street and Fenchurch Street is the site of the old Aldgate Pump. From 1700 it was from this point that distances were measured into the counties of Essex and Middlesex. The original pump was taken down in 1876, and a âfauxâ pump and drinking fountain was erected several yards to the west of the original; it was supplied by water from the New River. In ancient deeds, Alegate Well is mentioned, adjoining the City wall, and this may have been the source (of water) for the original pump. A section of the remains of Holy Trinity Priory can be seen through a window in a nearby office block, on the north side.

The area around the large traffic roundabout to the east of where the gate stood is also often referred to as Aldgate (although strictly, this is Aldgate High Street, and extends a short distance into Whitechapel; it is also known occasionally by the epithet âGardinersâ Cornerâ, in honour of a long-disappeared department store).