Blackbird Hill is image in 1906 and then part of Neasden. 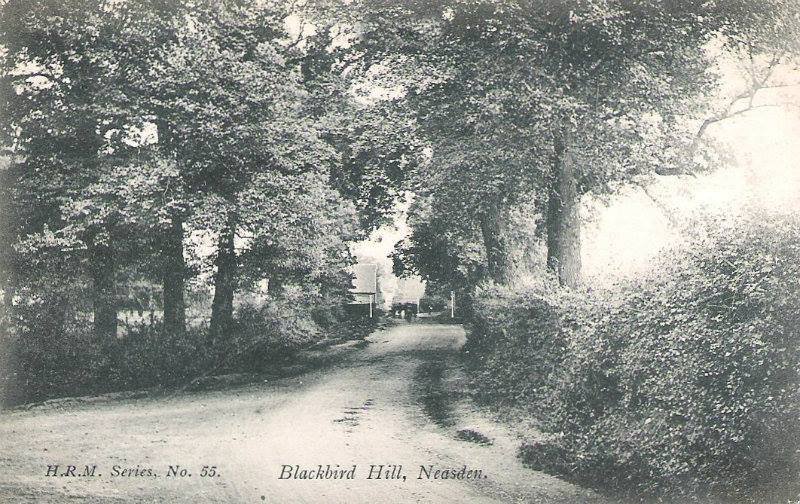 Blackbird Hill (1906)
Given the road entering from the left and the building in the background, this is a suggested location for this 1906 photograph.

Blackbird Hill was named after Blackbird Farm. We donât know when there was first a farm here. There were at least five âvillagersâ cultivating small areas of land in this part of Kingsbury at the time of the Domesday Book in 1085.

The large field behind it is shown as being leased to John Page, gentleman, by St Paulâs Cathedral (âThe Deane of Powlesâ), while the land on the opposite side of the main track was held by Eyan Chalkhill, who also had a watermill on the River Brent.

By the time of John Rocqueâs map of 1745, there were farm buildings and orchards on both sides of Old Church Lane. These would come to be known as the upper and lower yards of Blackbird (or Blackbird Hill) Farm. Whereas the original farm, or smallholding, was probably growing a mixture of crops, mainly to support the farmerâs own family, by the mid-18th century the map shows most of the fields as pasture land. This was probably for raising livestock, some of which would be driven to London to help provide meat for the capitalâs fast-growing population.

At the start of the First World War in 1914, Blackbird Hill Farm was still rural, as was much of Kingsbury, even though it was classed as an Urban District for local government purposes. When foot and mouth disease broke out at Blackbird Farm in 1923, and all of the cows had to be shot, that was the end of it as a working farm. Although the Noad family continued to live in the farmhouse, the rest of the land was sold off for housing.

The lower yard at cottages of Blackbird Hill Farm on Old Church Lane, c.1880.
Credit: Brent Archives
Licence: CC BY 2.0
To View or share the image, go to its dedicated web page