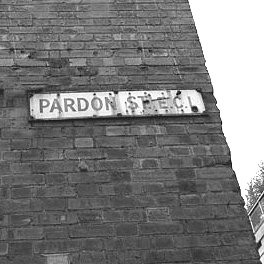 Pardon Street, formerly Clark Street, takes its name from a churchyard, established by Ralph de Stratford, Bishop of London. In the height of the Black Death, victims of the diseases were treated somewhat hastily: grave diggers eventually refused to bury the bodies properly. Corpses were then dumped into large communal pits.

Bishop Ralph de Stratford did not like this treatment of bodies and he bought a piece of ground called No Manâs Land, which was then consecrated and set aside for the bodies of plague victims. A small chapel was erected for prayers to be said for the pardon of their souls, and the graveyard was named Pardon Churchyard.