The area has been settled at least since the early Roman period; a Romano-British fort on Cox’s Mount (now  part of Maryon Park) was excavated in 1913, revealing finds dating from 60 AD through to the 4th century. The name Charlton is of Saxon origin, compounded of ceorl (=churl), referring to a small peasant farmer, and tūn, a settlement or farmstead. After 1066 the manor of Charlton was granted by William I to his half-brother Odo, Bishop of Bayeux, passing into the ownership of Bermondsey Abbey in 1093. The first record of a church at Charlton comes in 1077, while the Domesday survey of 1086 records a medium-sized village of 15 households with farmland amounting to 1 sulung (notionally equivalent to 240 acres) and valued at 7 pounds. The medieval parish of Charlton, part of the ancient hundred of Blackheath in the county of Kent, stretched all the way from Woolwich Common in the east to what is now Blackheath Village in the west; it was formerly known as Charlton-next-Woolwich to distinguish it from its east Kent namesake Charlton-by-Dover. 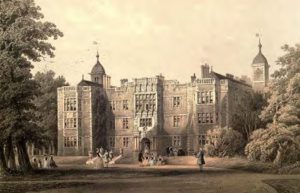 Lithograph of 1858 by James Holland, showing the west front of Charlton House

Market rights were granted by Henry III in 1268, as well as an annual fair. The latter had mutated by the 17th century into the institution of the ‘Horn Fair’, a popular spree held on the village green each St Luke’s Day (October 18th), preceding which large crowds of celebrants – elaborately costumed, often in drag – would process from Rotherhithe to Charlton, wearing horned head-dresses and playing upon ram’s-horn trumpets. Like others of its kind around the country, the Horn Fair – associated in local legend with a supposed sexual encounter between King John and the wife of a Charlton miller – was notoriously unruly; Daniel Defoe, writing in the 1720s in his Tour through the Whole Island of Great Britain, decried ‘the yearly collected rabble of mad-people at Horn-Fair, the rudeness of which, I cannot but think, is such as ought to be suppressed’. Daniel Lysons (The Environs of London, vol. 4, 1796) reports that the procession was discontinued in 1768, though the fair itself apparently survived for another hundred years, eventually being suppressed under the terms of the 1871 Fairs Act. A version of the Horn Fair was revived in the 1970s and continues today.

The manor, having reverted to the Crown at the Reformation, was acquired in 1606 by Sir Adam Newton, tutor and secretary to Henry, Prince of Wales. Newton was responsible for building the present Charlton House – the finest Jacobean mansion now surviving in London – between 1607 and 1612. St Luke, ‘a most attractive church in its humble, pre-classical character’ (as Pevsner and Cherry state in the volume on South London) also dates mainly from this period, since the provisions of Newton’s will allowed for the complete rebuilding of the Church in 1630-40. Other buildings remaining from this era include the stables, park wall and garden house – the latter a very early example of English Palladianism, traditionally (though without written evidence) attributed to Inigo Jones.

The 18th and early 19th centuries witnessed comparatively little change. John Rocque’s map of 1746 clearly shows the nucleus of the village, with Charlton House (called ‘Charlton Place’) and its park to the south, a scattering of houses further west along Charlton Road, and Hanging Wood, still at its full 150-acre extent, to the north-east. Twenty years later, in 1767, the Charlton estate passed into the ownership of the Maryon Wilson family, who would remain lords of the manor until the 1920s.

A series of drawings dating from the 1820s show Charlton still in its post-medieval aspect, with timber-framed buildings clustered along the muddy village street against a background of fields and woods. The village green, still visible in these drawings, was incorporated into the grounds of Charlton House in 1829.

Nos. 2-18 Lansdowne Lane built 1862-3, drawn by Falcon Hildred in 1967 prior to their demolition in 1968 © Crown copyright: Royal Commission on the Ancient and Historical Monuments of Wales

This period did witness the first phase of ‘suburban’ development, with several large detached villas built for members of the ‘carriage classes’, for whom Charlton, with its fresh air, panoramic views and good road connections, made a pleasant commuting base or weekend retreat. (The house formerly known as The Warren, now 78 Charlton Church Lane, is probably an example.)

The major impetus for suburbanisation came in 1849, however, when the South-Eastern Railway extended its North Kent Line from Gravesend through to London Bridge, with a station at the bottom of Charlton Church Lane. This had the double effect of stimulating rapid industrial growth in the riverside area – henceforth known as New Charlton – and encouraging suburban development around the old village. Residential growth was slow at first: groups of large villas were built in Charlton Church Lane and Victoria Way, with smaller cottages in Charlton Lane, Lansdowne Lane and Fairfield Grove.

A series of drawings made by the artist Falcon Hildred in the 1960s record a row of terraced cottages in Lansdowne Lane prior to their demolition in 1968 to make way for flats (now 1a Fletching Road). The detailed plans, elevations and elevated perspectives show that Nos. 2-18 comprised typical ‘two-up-two-down’ terraced houses with narrow street frontages, built on narrow tapering plots, with no bathrooms, only toilets housed in outbuildings to the rear. These drawings are an important record of humble, high-density workers housing, once so prevalent in mid- to late-19th century London, but which has rarely survived post-war redevelopment.

A remnant of this housing does in fact survive a little further to the north on Lansdowne Lane: Nos. 26-28, a pair of cottages, curiously set back some distance from the lane so that they are easily overlooked. 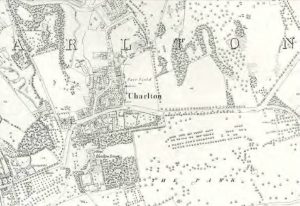 The increase in population prompted the laying-out of Charlton Cemetery in 1855, and the building of two new parish churches: St Thomas, Maryon Road (1849-50) and St Paul, Fairfield Grove (1867, now demolished). The Metropolitan Board of Works, whose sphere of authority stretched as far out as Woolwich, built imposing new premises (now demolished) on the south side of The Village. Nevertheless, as late as 1878 Edward Walford’s Old and New London could describe Charlton as ‘a pretty little village…still green and pleasant’ despite ‘the gradual extension of buildings’.

Large-scale expansion, joining Charlton up with Woolwich in the east and Blackheath in the west, came around the turn of the century, when Heathwood and (later) Kinveachy Gardens were built over part of Hanging Wood, and Elliscombe Road and its neighbours were laid out in the combes and sand-pits to the west. The core of the medieval village was largely rebuilt at this period, with the old timber-framed houses (of which the Bugle Horn Inn is now the only – much altered – survivor) giving way to brick-built Victorian commercial premises, comprising more than 20 shops including a fruiterer, a fishmonger, a bootmaker, a watchmaker, two drapers and two bakers, according to the 1881 census.

Charlton’s transformation from village to suburb was confirmed by its inclusion, after the local government reforms of the 1880s and 90s, within the purview of the newly-formed London County Council (LCC) and Metropolitan Borough of Greenwich. 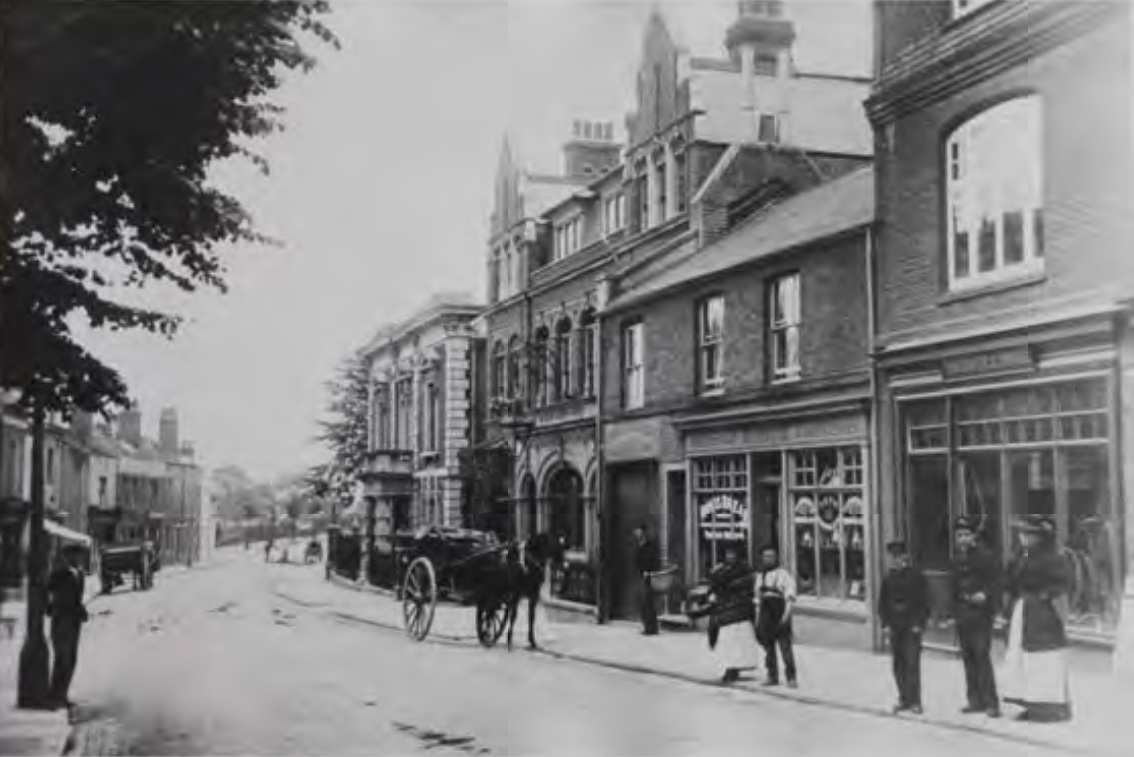 Postcard of 1915 showing the south side of The Village, including the White Swan PH