It is named after the Earl of Connaught who had a house nearby. The current appearance of the square dates from the 1820s. The square is just north of Hyde Park, and to the west of Edgware Road. It is also within 300 m of Marble Arch, and the western end of Oxford Street.

Connaught Square’s architecture is primarily Georgian. Redevelopment was initially planned in the early 18th century and the first of its 45 brick houses was built in 1828 as part of the Hyde Park estate by Thomas Allason.

Residents of Connaught Square hold an exclusive summer party in the central communal garden every year. The garden square is maintained by the owners of the adjoining properties who contribute to its upkeep, and in return are issued keys to the garden. Such gated gardens are a particular feature of this area of London. The horses of the Royal Artillery regularly do their early morning rides down Connaught Street.

In October 2004, the then Prime Minister Tony Blair and his wife Cherie purchased a house on the West side of Connaught Square, for a reported £3.5million. In many ways Blair’s house is similar to 10 Downing Street, having even been used as a replica for the official residence of the First Lord of the Treasury during the filming of the TV series “The Alan Clark Diaries”.

The houses on the west side back onto Archery Close, a very quiet, dead end picturesque mews street. Beyond Archery Close is St George’s Field, built on the site of the burial ground of St George’s, Hanover Square.

As well as houses, the square also contains other enterprises including a very small primary school and doctor’s surgery. To the west on Connaught Street are the shops of Connaught Village and the Chinese restaurant which was the location of dealings during the Bruce Grobbelaar football corruption scandal.

In fiction, Lionel Holland lives at 242 Connaught Square in the film “Kind Hearts and Coronets”. 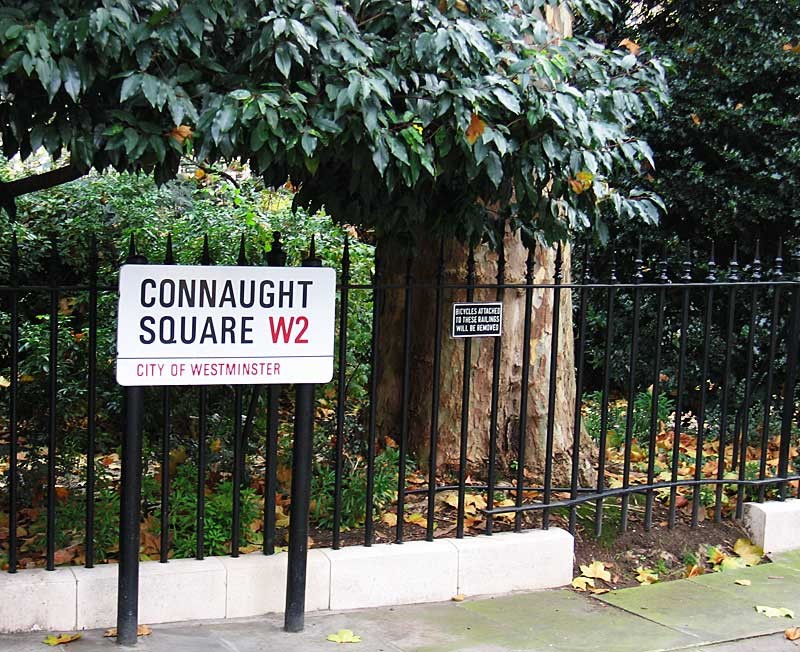