The origins of Eversholt Street lay in the 1750s when the New Road (later Euston Road) was established to bypass the congestion of London. North of this road were fields, brick works and market gardens. There was an informal path heading south from what later became Camden Town roughly along the line of the later street.

At the end of the 17th century, the Lord Chancellor John Somers acquired the local freehold. The immediate area was, at the beginning of the nineteenth century, known as Fig Mead.

The course of Eversholt Street began in the 1810s as the area developed. It provided a new route from the New Road with Camden Town. The name Eversholt Street was originally given only to its very northern, Bedford Estate part above Cranleigh Street (which was itself formerly Johnson Street). The Eversholt name refers to a village in Bedfordshire, most of the land in the village being owned by the Dukes of Bedford.

Eversholt Street is now part of a long series of streets going in the same direction with many names which starts at Bush House at the Aldwych. Kingsway becomes Southampton Row, then in turn Russell Square, Woburn Place, Tavistock Square, Upper Woburn Place and Eversholt Street.

North of the Euston Road, this part of Eversholt Street was originally Seymour Street.

At the Euston Road end of Eversholt Street/Seymour Street was, to the west of the street, the original Ampthill Square, proposed as a garden suburb by the land owner, the Duke of Bedford. Like many local names, Ampthill referred to Bedfordshire. Half of the square was bought by the London and Birmingham Railway for its tracks into Euston station and the station now dominates the southernmost section of Eversholt Street.

Further along Eversholt Street, and before it was laid out, the first local housing was built at the Polygon in 1784. Mary Wollstonecraft lived there with her husband William Godwin, and died there in 1797 after giving birth to the future Mary Shelley, author of Frankenstein. Dickens lived in the Polygon briefly as a child. The site of the Polygon is now occupied by a block of council flats called Oakshott Court.

The original name of this section of Eversholt Street was Upper Seymour Street.

In 1793 Frenchman Jacob Leroux leased land from the Somers family for building. Refugees from the French Revolution bought some of the houses and Somers Town began. Upper Seymour Street, once laid out, marked a western boundary. 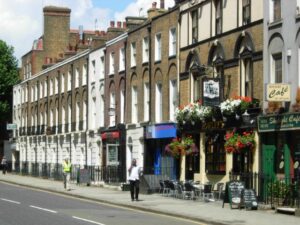 Plans for a more ’select’ Somers Town deteriorated from Leroux’s plan as the surrounding land was subsequently sold off in smaller lots for cheaper housing, especially after the start of construction in the 1830s of the railway lines into Euston. In this period the area housed a large transient population of labourers and the population density of the area soared.

Briefly a small section of the street had the original name Crawley Street and finally a section which has always been called Eversholt Street.

Where the street becomes Camden High Street, there is a statue commemorating Richard Cobden at the junction where Mornington Crescent station is situated. Richard Cobden MP led the fight for the repeal of the Corn Laws in the 1840s. The statue was erected by public subscription three years after his death. The French emporer Napoleon III was the principal contributor – Cobden had been contributory in establishing a free trade agreement with France in 1860. 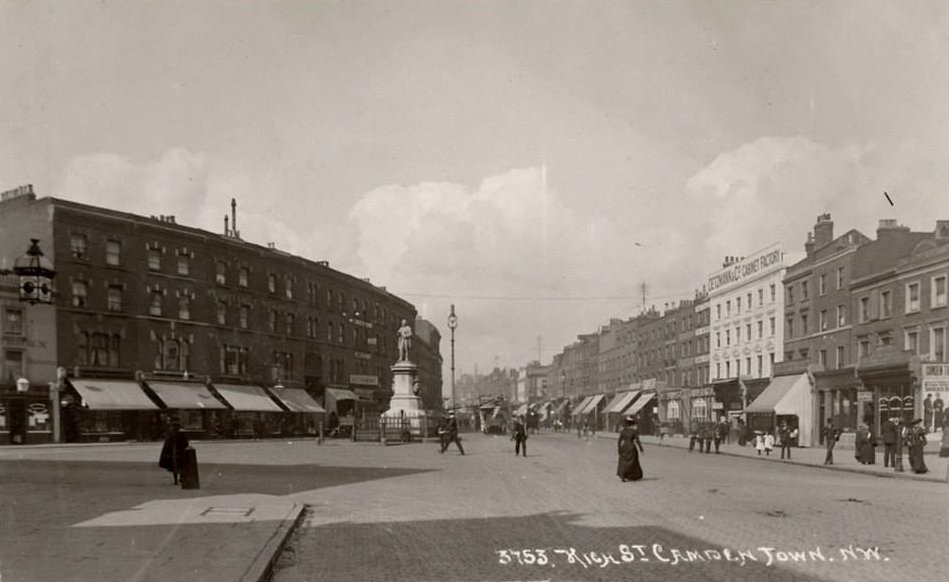