Hyde Park Corner tube station, a London Underground station served by the Piccadilly line, is located at the junction, as are a number of notable monuments.

Immediately to the north of the junction is Apsley House, the home of the first Duke of Wellington; several monuments to the Duke were erected in the vicinity, both in his lifetime and subsequently.

In the mid-nineteenth century, the space that is now the Hyde Park Corner traffic island was not entirely surrounded by roadway. In its centre stands the Wellington Arch (or Constitution Arch), designed by Decimus Burton and planned as a northern gate to the grounds of Buckingham Palace. In execution it was laid out as a gate into the Green Park, and was originally sited directly opposite Burton’s Ionic Screen (also known as the Hyde Park Corner Screen), which still provides a gate into Hyde Park. Originally, the Arch was topped with an equestrian statue of the Duke by Matthew Cotes Wyatt.

The Arch was moved south because of traffic congestion, and realigned to the axis of Constitution Hill in 1883. The boundary of Buckingham Palace’s garden was moved south, and a new road named Duke of Wellington Place was created; this separated the space containing the Arch from the rest of the Green Park. At this time, the large equestrian statue was removed to Aldershot. It was subsequently replaced with another work, entitled The Angel of Peace descending on the Quadriga of Victory, dated 1912, by the sculptor Adrian Jones; this remains in place.

Following the passage of the Park Lane Improvement Act 1958, Park Lane was widened in the early 1960s. For most of its length this was achieved by converting the former East Carriage Drive of Hyde Park into the northbound lanes of a dual carriageway, but at Hyde Park Corner, all lanes of traffic came together on a line immediately to the east of Apsley House that required demolition of houses on Piccadilly. This left Apsley House on an island site. The InterContinental London hotel was subsequently built on the cleared site between the new route of Park Lane and Hamilton Place.

At part of the same scheme, a tunnel was constructed beneath the junction to allow traffic to flow freely between Knightsbridge and Piccadilly. As a result, the area around the Arch became a large traffic island, mostly laid to grass, and accessible only by pedestrian underpassess, and formally ceased to be part of the Green Park.

Subsequent changes to the road layout in the 1990s reinstated a route between Hyde Park and the Green Park for pedestrians, cyclists and horseriders using surface-level crossings.

“Hyde Park Corner” was used as a codeword to announce to the government the death of King George VI in 1952. 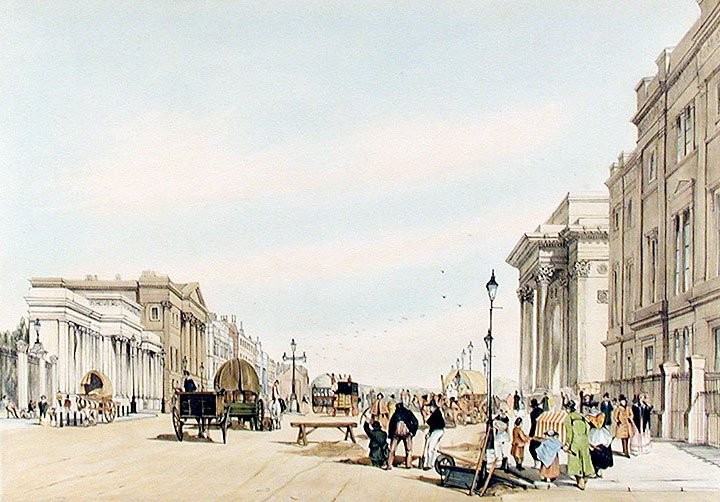