The area of Kilburn Park was developed in the 1850s somewhat south of the area then known as Kilburn in the fields west of the Edgware Road. The ‘Park’ in the name was simply an invention by the developer, James Bailey.

Bailey had teamed up in a consortium of five developers who in 1850 bought 47 acres from owner the Reverend Edward Stuart. The consortium laid out roads and sewers and divided the site among themselves, subletting to smaller firms who built a few houses each.

The isolated, muddy location failed to attract many buyers and the estate remained incomplete for several decades. Properties were soon subdivided, some containing as many as six households in the 1870s.

The suburb of Kilburn Park was finally complete in the late 1880s.

Kilburn Park station was opened on 31 January 1915 as the temporary terminus of the Bakerloo line’s extension from Paddington  towards Queen’s Park.

The original plan had the London North West Railway (LNWR) creating a new line from Queen’s Park to Euston – but these underground ideas changed and a new “proper” line was built instead. But extending south from Queen’s Park gained momentum and, in 1911, it was mooted to extend the London Electric Railway (LER) company’s Bakerloo Line in that direction.

The Bakerloo Line offered a direct West End route without the need for changing trains though the Bakerloo was not the first option for bringing trains into the West End from the direction of Watford. A connection with the Hampstead Tube at Chalk Farm was looked at but not found to be feasible so the more expensive Bakerloo scheme then became the preferred route. 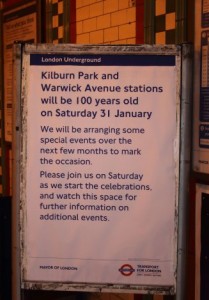 This arrangement suited the LER very well. It would capture a valuable new traffic and help fill the spare capacity along the existing line, and all at modest cost. It would also resolve once and for all how the Bakerloo should approach Paddington where the surface station layout was complicated. Vacillation about what to do after reaching Paddington had prevented the Bakerloo getting beyond Edgware Road as it was impossible to agree a route to Paddington without knowledge of where a future extension might go. Paddington was reached in 1913, with the GWR paying £18,000 towards the scheme.

Unfortunately, by the time work on the extension was well in hand, the Great War had broken out and this and other delays (including some very bad weather) somewhat disrupted plans. The Bakerloo service began on 31 January 1915, trains calling only at Warwick Avenue and Kilburn Park. Queens Park (though still incomplete) was sufficiently advanced to open on 11 February 1915, and Maida Vale was finally ready on 6 June 1915.

The Kilburn Park station building was designed by Stanley Heaps in a modified version of the earlier Leslie Green designed Bakerloo line stations with glazed terra cotta façades but without the large semi-circular windows at first floor level. It was one of the first London Underground stations built specifically to use escalators rather than lifts. Because of the lack of lifts, there was no longer any need for an engine room, and the new station building was built as a single story building.

Maida Vale station, down the line was the first London station to have all-female staff. When it opened in 1915 during the First World War, there were two ticket collectors, two porters, two booking clerks, and relief ticket collector-booking clerks. Kilburn Park station was also staffed by women, though not exclusively so.

Because of the shortage of male workers, women’s role expanded  on the Bakerloo Line – first of all in stations like Maida Vale and Kilburn Park, but eventually on trains too. In August 1918 an unofficial strike, mainly affecting this line, played a part in moving towards equal pay for women. 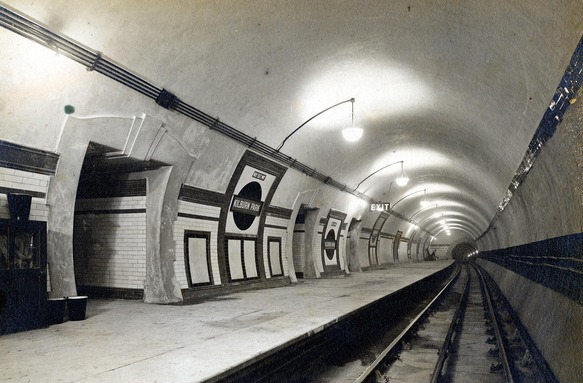