The whole area of Maida Vale belonged to the Bishop of London in 1647, when a Mrs Wheatley was tenant of a wood and of 44 acres of pasture in five closes, which lay between the high road and the Westbourne stream – this was probably the forerunner of Kilburn Bridge Farm. In 1742, when Richard Marsh was tenant, the farmhouse and its yards stood by the road close to the stream, with around 39 acres in six closes to the south and west. Kilburn Bridge Farm was worth £230 a year in 1795.

Further south, Paddington Wood and some fields of Manor House Farm abutted the Edgware Road, with fields of Parsonage Farm to the west. There were no other buildings in 1790.

Building was made possible by the Act of 1795 but for the northern part of the Bishop’s estate, the first agreements occurred in 1807.

Plots existed along Edgware Road, in Hill Field and Pond Field and as far north as Paddington Wood. Builders Francis Humbert of Marylebone and Abraham Callard of Paddington took a 61-year lease of part of Paddington Wood for six detached houses. Another plot was leased in 1807 to another builder Thomas Beedle for four houses bounded to the south by a ’street to Maida Hill’ (presumably Maida Avenue). Many more new houses followed between 1809 to 1814. Land behind the plots was granted for short terms to nurseries.

The name Maida was first recorded in 1807, the year after Sir John Stuart’s victory over the French at Maida in Italy. The Hero of Maida public house was licensed in 1810 at Maida Hill, which served as the new name of a short stretch of Edgware Road. Part of that stretch, including the public house, was known in the mid 19th century as Maida Hill East. Meanwhile Maida Hill West became the name of the road along the southern bank of the Regent’s Canal (from 1939 called Maida Avenue).

By 1828, as building had extended along Edgware Road, a short stretch beyond Maida Hill was called Maida Vale, which from 1868 was the name of the whole length of the road between the canal and Kilburn. The name was applied popularly to a district by the mid 1880s, a fact which was recognized in the creation of Maida Vale ward in Paddington metropolitan borough.

Also by 1828 houses lined the main road almost to the corner of Stranraer Place, which was to lead into Sutherland Gardens (both together forming Sutherland Avenue from 1887) and was about a third of the way to Kilburn Bridge. Some houses also lined Maida Hill West, although Blomfield Road did not yet skirt the north-west side of the canal.

By 1840 detached stuccoed villas lined most of Edgware Road, with a gap beyond the projected Elgin Road as far as Portsdown Terrace, which had replaced Kilburn Bridge Farm.

Buildings had filled the entire Edgware Road frontage by 1851 and had started to form a humbler line behind, although only Andover Place, at the north end backing Portsdown Terrace, was complete by 1855. The first line of housing behind Edgware Road had been completed by 1869. A new type of building, in red or multi-coloured brick, was used from the 1860s in the avenues parallel with Edgware Road and their cross-streets. It was soon to spread over the remaining land, giving most of Maida Vale an appearance very different from that of its southern, Italianate quarter.

Building continued steadily in the late 19th century but not very quickly. Behind the frontages, built up except for a stretch of Portsdown Road, the area enclosed by Shirland Road, Kilburn Park Road, and Portsdown Road and Sutherland Avenue was empty in 1886, allowing time for 26 acres in the north part to be saved for public use as Paddington recreation ground.

For all its wealth, Maida Vale was never as fashionable as the districts which overlooked Hyde Park. Titled residents were rare, although in 1858 the ex queen of Oudh lived in Warwick Road West and the rajah of Coorg, nearby in Clifton Villas. The comparatively slow spread of building over the heart of Maida Vale, in contrast to the building of St Peter’s Park south-west of Shirland Road, was presumably due to the ambition to maintain the character of a largely upper middle-class district.

Middle-class flats, including many of the earliest in London, were built from the 1890s, perhaps partly because buyers of large houses were tending to settle further out. Some blocks replaced older villas, particularly along the stretch of Edgware Road called Maida Vale, and others filled empty sites. Building also took place on the Marylebone side of the road and continued in the 20th century, giving the area much of its later character.

During the First World War, damage was caused by a bomb in Warrington Crescent, where the king and queen came after four houses had been destroyed and 140 affected nearby in 1918.

In the 1920s and 1930s Maida Vale continued to be described as one of London’s most desirable suburbs, with ’handsome piles of residential mansions’ and superior detached houses.

Flat-building along both sides of Edgware Road had made the Maida Vale section ’typical of suburban arterial roads in fairly well-to-do districts’ by the time of the Second World War.

In 1981 it was decided to sell the entire Maida Vale estate, consisting of more than 2000 properties. The sale was the most valuable yet undertaken by the Church Commissioners, who offered tenants a 20 per cent discount on the assessed market value of their houses and flats. 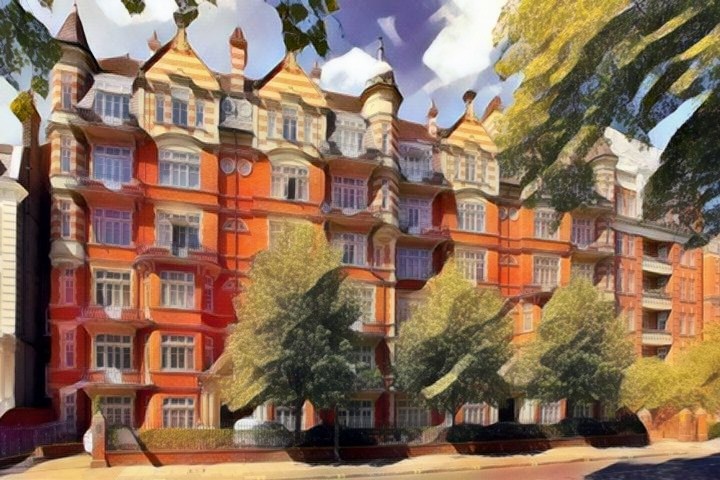