In 1876 potential sites for an infirmary for the sick poor of the parish of St Marylebone were being considered in the West End, Hampstead and Ladbroke Grove in North Kensington. The last site was finally chosen – a 3.5 acre site in Rackham Street costing almost £8100 – and the foundation stone was laid in 1879.

In 1881 the St Marylebone Union Infirmary was officially opened by the Prince and Princess of Wales. The building was three storeys high, with a central block and four pavilions. It had accommodation for 744 patients (372 males in the two pavilions to the west of the central block and 372 females to the east) and 86 resident staff (the Infirmary also had 82 non-resident staff).

The staff included a resident Medical Officer, whose annual salary should have been £500, but the Guardians managed to beat this down to £450, an Assistant Medical Officer, who earned £150 a year, a dispenser (£120 a year) and a Matron, who earned between £100-150. The Assistant Matron received £50-70 a year, while a pavilion nurse earned £28-32. A day or night nurse received £20-25 a year, while the Head Night Nurse received £32-38. Accommodation, rations, uniforms and laundry were included.

In 1884 more land was bought and a Nurses’ Home built, which was opened by Princess Christian, daughter of Queen Victoria. Florence Nightingale established a Training School for Nurses at the Infirmary, one of the first in a poor law establishment.

In 1902 an X-ray apparatus was installed and an operating theatre opened.

In 1923 the Infirmary was renamed the St Marylebone Hospital. By this time it had 732 beds; the patients were mainly chronically infirm adults and children. The following year an extension adjacent to the west end of the original Nurses’ Home was opened by the then Minister of Health, Neville Chamberlain (the extension became known as the Chamberlain Home). In 1926 some wards had bedside wireless sets installed. In 1928 an internal phone system was installed.

In 1930 the LCC took over administrative charge and renamed it St Charles Hospital. New buldings were erected in the open spaces between the pavilions during the 1930s and, in 1936, another new Nurses’ Home opened. In 1937 new accommodation was built for the night nurses at the northwest corner of the site, which had previously been occupied by the doctors’ garden (the Chamberlain Home had proved to be inadequate and noisy). In 1938 an epidemic of infective enteritis in babies caused several to be admitted. Some died and this affected the reputation of the Hospital for a while.

In 1939 the Hospital became a District General Hospital, but facilities were inadequate and few operations were performed. For the duration of WW2 all the top floor wards were closed. A bomb demolished the southern boundary wall and several windows were blown out. A few incendiary bombs fell in the open spaces, but the Hospital survived relatively unscathed.

In 1948 St Charles Hospital joined the NHS under the control of the Paddington Group Hospital Management Committee. The number of beds decreased as wards were taken over for other uses. By 1949 there were 400 beds, 260 of which were medical, including 60 for TB patients, 12 for venereal disease and 45 for children.

During the 1950s the Hospital acquired several Portakabins and an Out-Patients Department opened. In 1952 an 8-bedded plastic surgery unit was opened by Sir Harold Gillies (1882-1960).

In 1960 a bleeper system was installed for the medical staff. New pathology laboratories opened in 1964 and, in 1966, the wards were modernized. The Peter Pan Ward, with 36 beds, was opened as a facility for mothers to stay with their children. In 1967 a modern, fully air-conditioned twin operating theatre with anaesthetic and recovery rooms was built. The following year a new plastic surgery ward was opened by Lady Gillies.

The Out-Patients Department was extended in 1972 and, in 1973, a Paediatric Department was opened by Sir Keith Joseph (1918-1994), Secretary of State for Health and Social Services.

By 1981 the Hospital had 350 beds with 600 staff (one-third of which were resident), reversing the earlier situation when there had been more beds than staff. 104 beds were for general medical cases, 81 surgical, 36 orthopaedic, 36 paediatric and 63 for the elderly. The wards were upgraded and the following year plans were made for a new psychiatric and psychogeriatric unit to be established between the main Hospital and St Marks Road, giving an extra 116 beds and 120 places in a Day Hospital.

In-patient services gradually reduced though and, by 1998, the Hospital had 120 beds. The site became underused and its future uncertain. In 2007 NHS Direct closed its call centre based at the Hospital.

The Hospital is currently managed by Kensington and Chelsea Primary Case Trust (PCT), although historically most in-patients had been from Westminster. The PCT runs a Minor Injuries Unit, a palliative care centre and a pharmacy; there are 61 beds for patients requiring rehabilitation. About one-third of the site is occupied by a Mental Health Centre operated by the Central and North West London Mental Health Trust (CNWL). 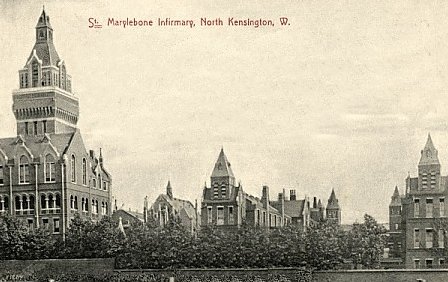