The Harley Estate of Marylebone

The Harley Street Conservation Area is situated within the boundaries of the ancient Manor of St Marylebone. The history of the Manor can be traced back to the Domesday Book in the 11th century, when the area was divided into two manors: Lilestone and Tyburn. Much of the area was covered with forest and marshland and formed part of thegreat forest of Middlesex.

Early development of this area was shaped in part by the River Tyburn. This rises on the slopes of Hampstead and flows south, skirting the west side of Regent’s Park, crossing Oxford Street near the bottom of Marylebone Lane. The original village of Tyburn was at a crossing point on the River, at the junction of Marylebone Lane and Oxford Street, close to where Stratford Place is today.

There were settlements here in Saxon and Medieval periods, the Church of St John the Evangelist was built  around 1200. When this was demolished in 1400, a new parish church of St Mary was built further north, at the top of the present-day High Street. A new village then developed here, and the name gradually changed  from Tyburn to St Mary’s by the Tybourne to Marylebourne.

From the time of the Norman Conquest the whole of this area had been owned by the Abbey of Barking, who leased the land to a succession of tenants. Following the dissolution of the monasteries in 1539, Henry VIII took possession of the Manor to create a new Royal hunting park, using the manor house on the present site of Devonshire Mews as a base.

James I finally sold the southern part of the land in 1611 and in 1708, when the area was still open fields, it was purchased by John Holles, Duke of Newcastle. The Duke’s daughter and heiress, Lady Henrietta Cavendish, married Edward Harley, Second Earl of Oxford. Having seen the growth of the great squares and streets south of Oxford Street, they decided to develop the estate. 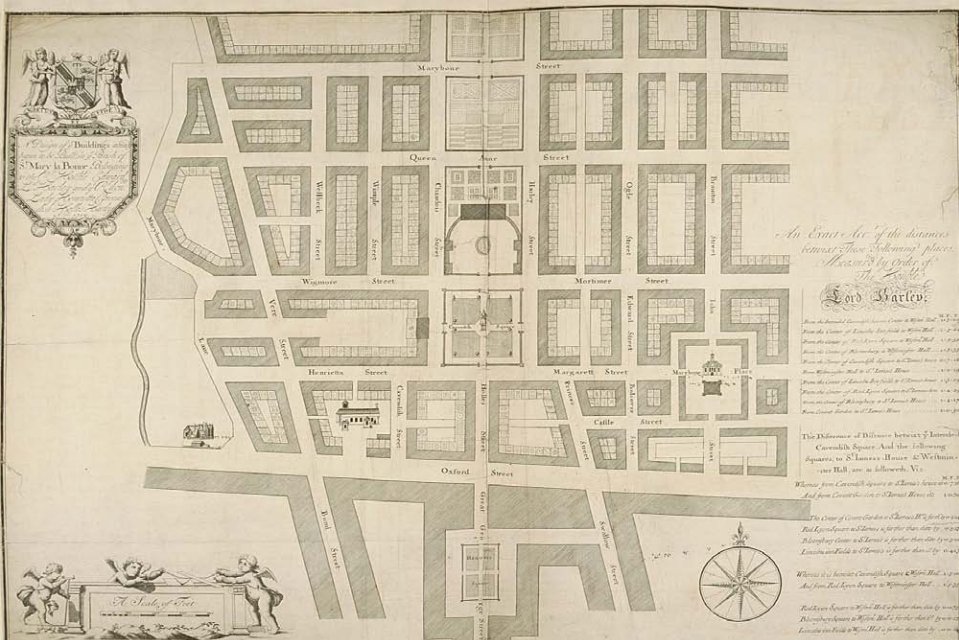 In 1719, John Prince, the Earl’s surveyor, was commissioned to draw up a masterplan for the Harley Estate. This was centred on a grand open square, included its own church and market; and was intended to attract wealthy Torys of the period.

The development of the new estate began with Cavendish Square in 1719. This initially had a central plot of green turf, upon which sheep were allowed to graze. Harcourt House was built in 1722, as the town residence of Lord Bingley. This stood in the centre of the three plots into which the west side of the square had been divided.

The Duke of Chandos planned a large private mansion in the corner of the square, which was never built; he did build two houses on the north-east and north-west corners of the square in 1724, of which only the western house survives today.

Economic recession and international wars made building progress slow and the area and the new estate developed gradually, in a piecemeal fashion, over around fifty years.

Roque’s map shows that by 1746 only the southern part of the area had been developed as far west as Marylebone Lane. Cavendish Square had been laid out with Mortimer and Margaret Streets running from the north east and south east corners of the square. Wigmore Street appears as Wigmore Row and the streets south of the square appear as at present, with St Peter’s Church, Vere Street, having been built in 1724 by James Gibbs as the Estate’s chapel, then known as Oxford Chapel. The site of Mansfield  Street was, at this time, occupied by the Marylebone Basin, a large reservoir for York Buildings Waterworks, which supplied water to waterworks at Buckingham Street and the Strand. 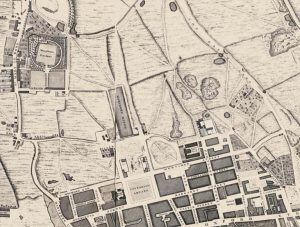 Also prominent on Roque’s map is Marylebone Gardens, occupying the present-day area of Beaumont Street,  Devonshire Place and Upper Wimpole Street. A popular pleasure resort until the late 18th century, famous for festivities and gala occasions. Marylebone Village was adjacent to the Gardens, centred around the High Street, the northern continuation of Marylebone Lane, but with open fields beyond.

The construction of the New Road, (Marylebone Road) in 1756 provided fresh impetus for the development of the  Harley Street area. By this time houses were being built in the adjoining streets, such as the southern end of Harley Street and Wimpole Street, Harley Street having first been rated in 1753. Marylebone Basin was in-filled in
1764-66 providing further scope for new development.

Harley Street itself could not initially be continued to Marylebone Road, being blocked by Crown property; when this north end was eventually developed, between 1770 and the 1820s, it was known as Upper Harley Street. Development northwards of Wimpole Street was also interrupted by Marylebone Gardens but, as speculative
building encroached towards the High Street, the Gardens were forced to close in 1778.

After the Gardens closed, Upper Wimpole Street, a little wider than Wimpole Street, and Devonshire Place, wider still, were planned and built. The western end of Weymouth Street, initially called Bowling Green Lane, was built on the site of the bowling green in the old Gardens. The old Manor House, which had functioned as a boy’s school since 1703, was finally demolished in 1791. 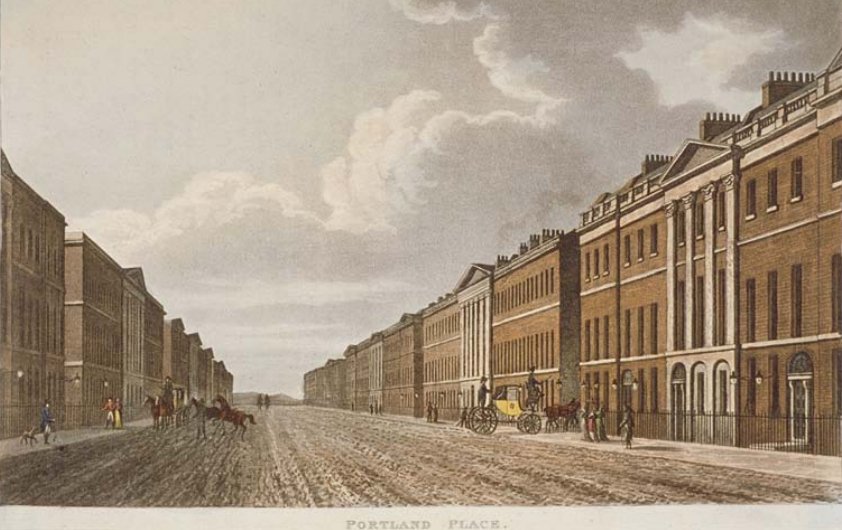 In the latter part of the eighteenth century, the most prominent architects of the time, the Adam Brothers, also became involved in developing the estate, most particularly Mansfield Street, completed in 1773, and Portland Place which was laid out in the 1770s. At the time of building, Portland Place was not designated as a thoroughfare, but a close of great houses opening onto Marylebone fields (Regent’s Park) in the north and terminated by Foley House to the south, where Langham Place is today. The grand terraces of Georgian houses attracted many fashionable and wealthy residents.

By the time of Horwood’s Map of 1792-99, development of the whole area from Oxford Street to the New Road (Marylebone Road) was substantially complete, stopping short only in Harley Street and Portland Place, at the southern end of Marylebone Park. Development has continued further west beyond  Marylebone Lane and into the Portman Estate, with Thayer Street and Hinde Street appearing as later continuations of Marylebone High Street (then Marylebone Lane) and Bentinck Streets respectively.

In the early nineteenth century, the most significant developments took place around Portland Place, as the leases on Marylebone Park (Regent’s Park), which was then still in agricultural use, reverted back to the Crown in 1811. John Nash incorporated Portland Place into his town planning scheme to create a ‘Royal Mile’ to lead from Carlton House to Regent’s Park. The connection at the south end of Portland Place with the new Regent Street was obliged to sweep around to form Langham Place and Nash built All Souls’ Church at the axis, at the head of Regent Street in 1822-24. The north end of Portland Place still opened onto the vista of Regent’s Park but was linked by the semicircle of Park Crescent and by Park Square as a thoroughfare to Regent’s Park.

In the mid nineteenth century the area first became associated with the medical profession, as the City’s medical consultants followed a fashion to move westwards. A location in the southern part of Harley
Street, as close to Cavendish Square as possible, was originally considered to be most prestigious. The name of Mortimer Street, at the north east corner of Cavendish Square was therefore changed to Cavendish
Place in the mid 19th Century, to increase the number of potential medical addresses associated with Cavendish Square.

By 1891, it is said that the population of doctors in the Harley Street area equalled that of non-medical persons. Additional medical establishments and institutions located themselves in the area, with the Medical Society of London moving to Chandos Street in 1872 and the Royal Society of Medicine to Wimpole Street in
1912.

Educational uses also appeared in the area. The Royal Polytechnic Institution, now part of the University of Westminster, was founded in Regent Street in 1839; Queen’s College, Harley Street, was founded as the first college in the country for the higher education of women in 1848; and the Royal Academy of Music moved to its present site on Marylebone Road in 1912.

However, despite its continued growth, there were also pockets of poverty in and around Marylebone. The Ossington buildings, off Moxon Street were built as model housing for the working classes, replacing slums, whilst behind them in Grotto Passage was a ragged school. The estate remained in the possession of the Dukes of Portland until the fifth Duke died unmarried in 1879. The estate then passed to his sister Lucy, Baroness Howard de Walden, in 1889, in whose family it remains today. In the late Victorian and early Edwardian eras, the Howard de Walden Estate sought to tackle the decline in some parts of the area, building mansion flats to replace older terraced houses.

During the 1890s and 1900s many Georgian houses, in Harley Street, Wimpole Street and Devonshire Place, were rebuilt in more flamboyant late Victorian and Edwardian styles, reflecting changing tastes. A greater proportion of houses have been rebuilt in this way at the southern end of the conservation area. The Howard de Walden Estate also substantially redeveloped parts of Marylebone High Street during the late
nineteenth and early twentieth centuries and, as a result, the street became, and remains, almost entirely a shopping street.

Along Oxford Street, the character of the area had also begun to change as large purpose-built department stores replaced smaller shops from the late nineteenth century and the scale of the development in this part of the area changed.

Later in the twentieth century, the eastern and southern parts of the conservation area in particular underwent substantial redevelopment; much of this also on a considerably larger scale, occupying wider plot widths than the original Georgian buildings. Parts of Portland Place were redeveloped in the interwar period, with large Portland stone beaux arts buildings, the 1931 BBC Broadcasting House building by Val Myers, interrupting the original Georgian townscape.

During the Second World War, there was significant bomb damage to parts of the conservation area, especially to the south and east. The old St Marylebone Church which had closed in 1926, was bomb damaged during the war and subsequently demolished in 1949. Today a small garden laid out in 1951 commemorates the original site, at the north end of Marylebone High Street.

From the mid 1930s onwards, the entire southern side of Cavendish Square was redeveloped with large modern buildings and a high proportion of original buildings on the east and west sides were replaced or rebuilt. The present layout of the garden dates from 1971 when the underground car park was built under the square by Westminster City Council.

Today the Harley Street area retains a substantial medical presence, whilst offices predominate to the eastern edges. Many of the original Georgian houses are now occupied by offices and flats. Harley Street was first designated as a conservation area in 1968.