Local and social historian Tom Vague writes about the Mangrove restaurant which stood on the corner of All Saints Road and Westbourne Park Road between 1968 and 1991.

“Mangrove, smell of hashish, swirling clouds of ashen smoke, weave in, around, away, palms like giant fingers, sounds of laughing, belly deep and penetrating, wise words and indiscretions, deep canary yellows, matted reds and browns, a tropical tapestry of colour, light and sounds.” ‘All Saints and Sinners’, Jenneba Sie Jalloh,

The Mangrove restaurant was founded at 8 All Saints Road in 1968 by Frank Crichlow, previously of El Rio cafe at 127 Westbourne Park Road (where Christine Keeler met Lucky Gordon in the Profumo affair). As the Mangrove became the hippest Notting Hill restaurant of them all, ‘turn on West Indian and English feasts’ were served to Sammy Davis Junior, Marvin Gaye, Jimi Hendrix, Nina Simone, Sarah Vaughan, Diana Ross and the Supremes, the Four Tops, CLR James, Vanessa Redgrave, Jimmy Hill and the cast of ‘The Avengers’. Frank recalled: “People would be waiting outside in cars until tables were free. The place was out of this world – in just a couple of months it was pop-u-lar. The place would be packed and we’d see the police peeping through the windows…”

In 1970 a march was organised to protest about police persecution of the Mangrove around the three local police stations, Notting Hill station on Ladbroke Road, Sirdar Road in Notting Dale, and the plan was to finish at Harrow Road. As the march went up Great Western Road under the newly opened Westway, police attempts to divert it away from the Harrow Road station resulted in a mini-riot on Portnall Road, the arrest of 17 demonstrators, and the trial of the Mangrove 9 – including Frank and Darcus Howe.

The following month Jimi Hendrix was reputedly last seen in the Mangrove the night before he died. Bob Marley also appeared at the restaurant when he was recording on Basing Street. Next door at 8a All Saints Road the hippy healthfood shop Ceres (later at 269 Portobello Road) cooked up the macrobiotic food revolution unhindered by the establishment. As well as feeding the hippy festival masses, the Ceres Sams family were wholefood suppliers to John Lennon and Yoko Ono and Marc and June Bolan. 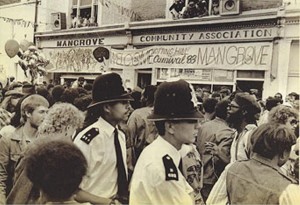 In 1971 the Mangrove 9 were acquitted of conspiracy to cause riot and affray. The Mangrove special International Times reported: “In the pub afterwards, the jurors explained why they went against Judge Clarke’s biased conduct of the trial and told defendants they were astonished at police methods and thought they often lied.” In the Met’s football analogy the verdict was seen as Mangrove 1 Police 0. The notorious PC Frank Pulley remained adamant that 8 All Saints Road was a legitimate object of frequent police investigation, as it was ‘a haunt of criminals, prostitutes and the like.’ The new North Kensington Labour MP Bruce Douglas-Mann said in the trial that the mere presence of Pulley in the area constituted “a provocation to the black population.” Whereas Pulley’s boss Gilbert Kelland cited him in ‘Crime in London’ as “one of the most outstanding operational officers the force has ever known”, David May of Friends and the Kensington News recalled Pulley’s line was: “I am in no way racist, but these blacks are breaking the law with Marijuana.”

“It was those same people, the ones who were called pimps and prostitutes and drug pushers, who created Carnival and keep creating it… On that level the establishment did not suppress the black movement. We won; we more than won. We created a community.” writes Courtney Tulloch in ‘Days in the Life’.

As the police inadvertently brought about Courtney Tulloch’s black British revolution, the Mangrove transformed from a Caribbean cafe into the black power restaurant/community association/working men’s club/revolutionary talking shop. The Met’s reefer madness began two decades of Mangrove raids, busts, trials, demos, riots and general antagonism between the police and the black community, that made All Saints Road the epicentre of young black London, the capital’s main reggae artery and the Carnival backstage area. In the 1976 riot the Mangrove was besieged by police and Frank Crichlow and Darcus Howe were arrested again.

Through the 1980s the premises were regularly raided, as All Saints became known as the frontline. In the 1987 police ‘swamp’ of the area, as part of the inner-city crime crackdown Operation Trident, the Mangrove was raided again and this time Frank Crichlow was charged with possession of heroin. To the Wise brothers, the accompanying installation of surveillance cameras and the closure of squatted ‘abandoned commercial property’ marked the start of Notting Hill gentrification: “Within days a house in McGregor Road was to fetch £300,000. The very centre of Carnival revolt in the 80s had finally fallen and the light had gone out on the last remaining shambles of an urban trouble spot.”

Lee Jasper recalls dealing with a mas band sequin crisis as the 1987 riot began: “The police were attempting to close down, fit up and destroy Mangrove and indeed the whole of Carnival. We’re on the verge of a major civil disturbance and people would be coming in and saying I don’t have any red sequins.”

In the last Mangrove trial Frank Crichlow was once more cleared of trumped up drugs charges. After that the police raided the Mangrove some more, causing further clashes on All Saints and the last big Carnival riot in 1989.

According to the Evening Standard: ‘5,000 police, almost 600 in full riot gear with shields, and some police on horseback, fought running battles with pockets of revellers after trouble was sparked in the All Saints Road area. Within seconds they had to retreat under a hail of bottles and flower pots. Uniformed officers battled in vain to contain the trouble, drafting in riot police who sealed off a section of Lancaster Road. But they came under attack from two directions as youths in All Saints Road and Westbourne Park Road began hurling missiles.’

As ‘The Mangrove: 21 Years of Resistance’ banner came down in 1991, 6-8 All Saints Road reopened as the Portobello Dining Rooms. Rastafarians were succeeded by trustafarians and the street name started to appear in more restaurant reviews than crime reports. However, then came the mid 90s crack cocaine drug crime revival. Frank Crichlow was subsequently awarded £50,000 damages.

In the run-up to the 1995 Carnival, Ma’s Café at 6-8 All Saints Road (formerly the Mangrove, the Portobello Dining Rooms and Nice, since Manor, Ruby & Sequoia, the Hurlingham and Rum Kitchen) was the scene of a scuffle involving Hugh Grant, in which the actor was ridiculed over the Divine Brown affair. An onlooker said: “He was okay but he had a bit of blood on him. I don’t think he’ll be back.”

After the demise of the Mangrove restaurant, the frontline spirit was maintained by the Mangrove Community Association office over the road until 2002, Daddy Vigo’s People’s Sound reggae record shop at number 11, the Portobello Music Shop at 13, Nation Records and the Carnival sound-systems. Following a series of Rolex robberies and ‘aristocrats on crack’ reports, Annabel Heseltine wrote in the Standard of ‘Crack, Guns and Fear’ Notting Hell juxtaposed with trustafarian Heaven W11 ‘Cool Britannia’ on All Saints: “Opposite Philsen’s Phil-Inn Station – a café frequented by local hip-swinging Rastas – young media types are strolling into Mas Café… A bakery selling walnut loaves and bagels generates a warm aroma in the direction of Tom Dixon’s gallery…” (The designer Tom Dixon was in the 80s group Funkapolitan.)