Wells Street is an old route, marking the boundary between former freeholds: the Cavendish–Harley, later Portland and then Howard de Walden estate to the west, and the smaller Berners estate to the east.

By the beginning of the eighteenth century, landuse in Marylebone was by no means purely agricultural. Clay and gravel pits abounded due to London’s encroachment, and a tenant of one of the eastern fields, George Wells, had been called a brickmaker as far back as 1658. Wells Lane or Street, named after him, was another old track, but did not connect with Oxford Street till the 1690s.

George Wells occupied the fields east of the lane, called Newlands, when they were bought by Josias Berners in 1654, and where he erected some long-vanished buildings.

Wells (‘Welses’) Lane is first recorded in 1692, when James Long, the Covent Garden inn-keeper and brewer interested in the lands to its west, got permission to create a short route from Oxford Street to join up with the bottom of the lane, which evidently had hitherto gone no further south than Marylebone Passage, the old path that once ran north-west from Oxford Street to Marylebone High Street but is preserved today only in the short stretch linking Wells and Margaret Streets. Wells Street became the usual form as development crept up both its sides.

Rocque calls it ’Marybone Place’ on his map of 1745 – probably in error. But he usefully depicts its character at that date: a fair-sized roadway at the point it emerges from Oxford Street, veering a little westward north of Eastcastle Street, falling off to a track beyond Mortimer Street and degenerating into a footpath at the top, beyond the present line of Riding House Street.

On its east side Rocque shows little apart from an enclosed garden and a sizeable building just north of the end of Margaret Street, perhaps George Wells’s former house and/or the successor to the bowling green and house. The west side he shows scrappily developed up to Mortimer Street but no further, mainly as returns to the intersecting streets. Head leases along this western, Cavendish–Harley frontage were being granted at dates from 1723 (nearest Oxford Street) to 1735 (nearest Mortimer Street), except for the short stretch between Margaret Street and Marylebone Passage, leased as late as 1769. North of Mortimer Street, the west frontage was leased to Thomas Huddle in 1751.

Early nineteenth-century maps of the Portland estate’s eastern fringe show that Wells Street’s west side continued ragged and amorphous. At the top, between Mortimer and Riding House Streets, came a strip of broad shallow premises with workshops behind. South of the short mews now called Bywell Place, the frontage belonged to houses on the north side of Mortimer Street. The next stretch southwards was more regular, but again densely packed with workshops within the block. Here probably was the Wells Street site rejected for a church by the Vestry in 1822 because it was surrounded on three sides by carpenters’, wheelwrights’ and coachmakers’ shops as well as a ‘combustible manufactory’. And indeed many of the back premises hereabouts were destroyed or damaged by fires, either the extensive blaze of 1825, or a more restricted one at the north end of this block in 1830. Among the premises damaged in 1825 was No. 55 close to Mortimer Street, base from about 1805 until his death in 1845 of Andrew Pears senior, originator of Pears soap. The directories list him first as ‘rouge and carmine maker’, later as a ‘wholesale and retail perfumer’. Some years after he died the works were moved to Isleworth.

Wells Street pubs in 1841 included the Tiger at No. 24 beside Wells Mews, and the Boot at No. 47, beside Rebecca Court.12 On the west side, the Northumberland Arms at No. 77 was the ancestor of the present-day Adam and Eve. Wells Street’s other extant pub is The Champion at the Eastcastle Street junction (Nos 12–13), apparently a new foundation and building of about 1865 (Ills 28/1, 28/2). At the end of the nineteenth century The Champion had four separate bars, each with its street door, but these were later reduced to two. The Architectural Review trumpeted a fresh arrangement of 1954–5 by John and Sylvia Reid as ‘the first example of creative refitting of an existing pub’, following that magazine’s pub competition. Victorian in spirit but not detail, this make-over reopened one of the entrances in order to introduce a ‘cosy’; the decorative work cleverly mixed traditional and new fittings, with bench seating round the walls, a display of barrels and bottles over the bar, a geometrical wall paper by John Aldridge on the ceiling, and etched windows. Little of this scheme survives. The main feature today is a wrap-around panorama of pictorial stained glass, recent in date, depicting champions in sundry walks of life, mainly sporting, but including David Livingstone and the 6th Earl of Mayo.

Adjoining the Northumberland Arms, at No. 76, a fire station of the London Fire Engine Establishment was in operation between 1833 and 1865. 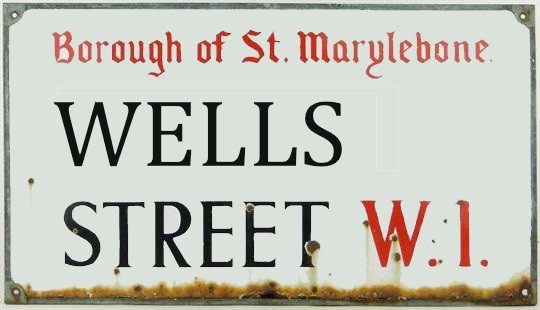