The station was constructed to serve the pleasure grounds developed by the MR at Wembley Park, a former country estate bought by the company in 1881 as a destination for excursion trips on the company’s trains. The station opened for the first time on 14 October 1893 and initially operated to serve only Saturday football matches in the park. It opened fully on 12 May 1894.

Later in the 1890s, the Great Central Railway’s (GCR’s) London extension was constructed adjacent to the MR’s tracks. The tracks pass under the entrance building but the station has never been served by mainline operators. In 1905 the tracks were electrified and the first electric trains became operational. Between 1913 and 1915, the MR added additional tracks to double the line’s capacity.

Originally, the MR served all stations south from Wembley Park to Baker Street station but the line suffered from congestion due to limited capacity on the tracks heading into Baker Street. Following the combination of the MR and London’s other underground railways to form the London Passenger Transport Board (LPTB) in 1933, the LPTB took steps to alleviate the congestion by constructing new Bakerloo Line tunnels from Baker Street to connect to the Metropolitan’s tracks south of Finchley Road station. From 20 November 1939, the Bakerloo Line then took over the Metropolitan stopping services between Wembley Park and Finchley Road and the Stanmore branch. 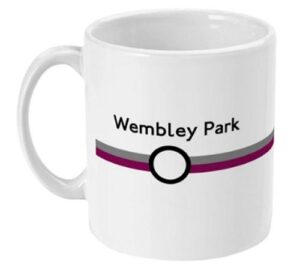 The UEFA European Football Championship was held at Wembley in 1996. As football was coming home, a large new staircase was constructed leading down from the 1948 extension and under the newly-built Bobby Moore Bridge, which had opened in 1993. This was intended as a temporary structure and remained in its unfinished state until 2004, when extensive work began on the station in conjunction with the reconstruction of Wembley Stadium.

Additional facilities were provided to handle event crowds, and the staircase was completed in time for the opening of the new stadium in 2007.